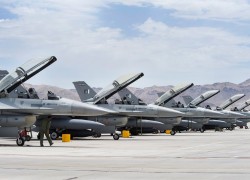 In a statement released in Lisbon, Tuesday, the US Secretary of the Navy, Ray Mabus, acknowledged the strategic importance of the Lajes Air Base on Terceira, Azores, but stated the future of the base was “uncertain.”

Reiterating the importance of the strategic position of Lajes Air Base to the US and its NATO partners, Mabus stated that, although the US Air Force is committed to maintaining operations at the Lajes Air Base in the Azores, “leaving the Azores is one of the options under consideration.”

Stressing that “no final decision has been taken yet,” Mabus said the US military could abandon the base in the future after “assessing strategic and budget constraints.”

Recently, the US Department of State had indicated that it is currently reviewing its diplomatic missions worldwide and that the American Consulate in Ponta Delgada, Azores, was under review.

News that the US Department of State was considering closing its Consulate in Ponta Delgada, was met with apprehension by the Portuguese American community of Azorean descent.

Activated in 1943, Lajes Air Base, located on the northeast tip of Terceira Island, is home to the 65th Air Base Wing and U.S. Forces Azores. It provides logistics support for more than 3,000 aircraft, including fighters from the United States and 20 allied nations.