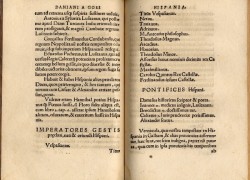 Written in 1542 by Portuguese humanist philosopher Damião de Góis (1501-1574), a friend and student of Erasmus, the 30-page book is entitled “Hispania damiani a goes equitis lusitani”.

The book is a description of Spain and Portugal by Damião de Góis an important figure in the Portuguese humanist movement, written to correct errors made by other writers, particularly Sebastian Münster.

It notes, among other things, the products imported from overseas dominions, including the Spanish possessions in the Americas, and Brazil. King Manuel of Portugal’s importation of elephants and rhinoceros is also emphasized.

It was stolen from the stand of specialist Dutch publisher’s “Asher Rare Books” during the Frankfurt Book Fair, police said, confirming a report in the mass-circulation Bild newspaper.

Although the work is valued at 18,500 euros, it could be worth ten times that to a collector, the paper said.

German investigators of Frankfurt have posted a picture of the book cover on the local  police website hoping to raise  awareness of book traders for the stolen book.

At least two copies of the original edition of the stolen book are housed at the National Library in Lisbon, and the Library of the University of Coimbra.

Born in 1501, Damião de Góis was  a leading Portuguese humanist and one of the most critical spirits of his age. He was born of a noble family and spent 10 years of his childhood at the court of King Manuel I. He was appointed to a secretarial post at a Portuguese trading establishment in Antwerp in 1523 by King John III, Manuel’s successor. He carried out a series of diplomatic and commercial missions throughout Europe before resigned in 1533 to devote himself exclusively to writing. Persecuted by the Inquisition, he died under mysterious circumstances in 1574.