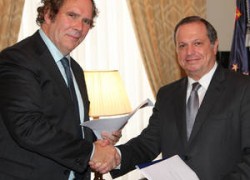 The Eurodyssey is an exchange program between European Regions, which allows young job seekers aged between 18 and 30 to benefit from a traineeship placement abroad for a period between three to seven months.

Under the agreement, students from both regions will have an opportunity to acquire new professional and language skills in important areas such as geology, marine research, volcanology and tourism.

For Carlos César, who has been the president and chair of the Eurodyssey program for the last five years, the agreement offers an international perspective in the context of Euro-Canadian cooperation.

Eurodyssey, created in 1985, aims to promote mobility and employability of youngsters from twenty-nine European participating regions. Quebec is the first region outside the European Union to join the Eurodyssey program.