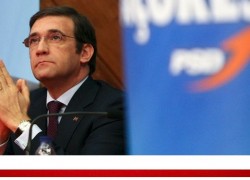 Portuguese Prime Minister Passos Coelho, national leader of the Social Democratic Party (PSD), was the guest speaker at the XX Social Democratic Regional Convention, which took place in Ponta Delgada over the weekend.

The event was presided by Duarte Freitas, the regional leader of PSD, elected with 92.6 percent of the vote December 18. About 300 PSD delegates attended the convention held at the Auditorium Luís de Camões.

In his speech, the prime Minister spoke with confidence of the central government policies in progress to reducing the national deficit and pull the county off a recession which has lasted for over two years.

According to Passos Coelho, the financial situation in the country has improved.  He said, “It is not fair to compare Portugal with Greece which is entering its fifth year of recession having lost about 25% of its national wealth.”

The PSD in the Azores (PSD/A) won 33% of votes, winning 20 parliamentary seats in the legislative elections held on October 2012, while Vasco Cordeiro, the leader of the regional Socialist Party (PS), was elect President of the Regional Government, with an absolute majority of 49% of votes.

The social democrats (PSD) had won 18 of a total of 19 precincts in the Azores in the June 5 national elections, which elected Portugal’s Prime Minister Pedro Passos Coelho, the national leader of the Social Democratic Party (PSD).