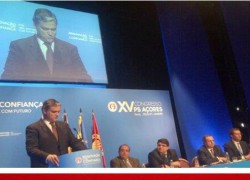 The XV Socialist Party Regional Convention was held in Azores over the weekend. The event was presided by Vasco Cordeiro, President of the Regional Government of the Azores and leader of the PS/A [Partido Socialista/Açores].

Under the theme “Renovating with Confidence for an Autonomy with Future” [Renovação com Confiança por uma Autonomia com Futuro], a total of 272 delegates attended the convention which took place in Horta city, Faial island.

The event was attended by António José Seguro, national leader of the Socialist Party.  Socialist António Costa, the current Mayor of Lisbon, was the keynote speaker.

Addressing the convention on Sunday, President Cordeiro spoke of the challenges his government will face in the near future. Saying that 2013 will be particularly challenging, Cordeiro added, “It will be a year of difficulties and constraints for all, reflecting the unemployment that has already reached many Azorean men and women.”

Concerned with the rising unemployment in the tourism sector, the second most important economic sector in the Azores, President Cordeiro announced that his government will pursue new policies aimed to overhauling the sector, namely reforming air transportation policies.

Cordeiro also challenged the center-right central government policies toward the islands by saying that the regional government is prepared to contest any measures detrimental to the interests of the Region. He accused the central government, led by social democrat Prime Minister Passos Coelho,  of “blindly” treating the Azores as being the same as the mainland and that, by doing so, “This attitude is more part of the problem than the solution for the country and for the Azores,” he said.

Vasco Cordeiro, 39, was elected Regional President of the Azores in October 2012, with an absolute majority of 49% of votes. He won 31 out of a total of 57 parliamentary seats for his party. He replaced socialist Carlos César, 16 years in office, as the President of the Regional Government.