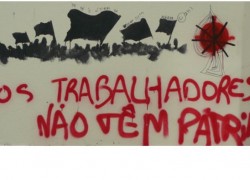 The Portuguese largest trade union federations, CGTP and UGT, are meeting Wednesday to debate calling a general strike and other protest actions against the austerity measures announced by the government last week.

João Proença, the leader of the UGT , said the protests will culminate in a nationwide strike with the CGTP.

CGTP union leader, Arménio Carlos, said the actions were justified, considering that the policies the government is implementing “constitute a declaration of war against workers, pensioners, the young and the unemployed.”

The Finance Minister announced Tuesday, following the results of the 5th assessment by the country’s bailout troika (International Monetary Fund, European Central Bank and European Commission), that workers’ pensions over Euro1,500 would be reduced and there would be fewer tax brackets, implying an increase in income tax for many.

On September 7, Portuguese Prime Minister, Pedro Passos Coelho, announced to the country that workers would have to pay an additional 7% in social security contributions while companies would be asked to pay 5.25% less.