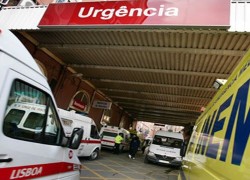 Doctors are protesting against what they called “the government’s progressive dismantling of the health service.”  In question were the restructuring of the national hospital system and the establishment of new code of ethics. Demonstrations were being staged outside the Ministry of Health in Lisbon on Tuesday.

Since 2011, after Portugal requested an international bailout, working conditions in the National Health Service system have been deteriorating resulting from the government austerity policy of layoffs, pay cuts and longer working hours. Copayment for patients has doubled while the waiting time for surgery has increased significantly.

The Portuguese health minister, Paulo Macedo, said on Monday that he could not understand the timing for the strike. He said it would damage a key public service at a time when the country has just emerged from an economic and financial emergency.

The minister also stressed that he has kept an open dialogue with the unions concerning the problems that face the health sector. He dismissed the strike as not “credible” or “constructive” given the country’s situation.

The Sindicato Independente dos Médicos (SIM), the second largest doctors’ union, is not taking part in the strike.  The strike is being supported by the Ordem dos Medicos, the professional doctors association. A minimum level of service has been guaranteed in emergency rooms, intensive care units and radiotherapy units.