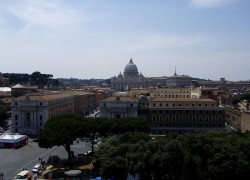 An extreme Marian organization behind the obscure Fatima Movement has claimed that, according to a new interpretation of the Third Secret of Fatima, the Vatican will be destroyed on August 17, 2011.

According to their claim, the prediction is based on a new translation of the 1944  Vatican documentation of the the Three Secrets of Fatima.

The Fatima Movement believes to hold the true prophecy of the Third Secret and claims that the oficial version released by Vatican is false.  According to the Fatima Movement  interpretation, “The cathedral of Rome must be destroyed and a new one built in Fatima.”

The Three Secrets of Fátima consist of a series of prophecies given by an apparition of the Blessed Virgin Mary to three young Portuguese shepherds, Lúcia Santos and her cousins Jacinta and Francisco Marto, starting on 13 May 1917, at Cova de Iria, Portugal. The three children claimed to have been visited by a Marian apparition six times between May and October 1917.

On 13 May 2000, 83 years after Fatima apparitions, the Third Secret was revealed by the Vatican. Reportedly, the secret was about the persecution of Christians in the 20th century that culminated in the failed assassination attempt on Pope John Paul II, on 13 May 1981.