Profile: José Luís Peixoto has a gift for emotion and sensibility – Essay 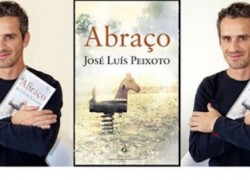 José Luís Peixoto is a conduit for emotion.  Sensations emerge immediately in the opening lines of his fiction, poetry, and non-fiction as they do in his voice the moment he begins reading or talking about writing.  Whether evoking the starkly luminous Alentejo landscape of his youth or joyfully holding his recently published first children’s book (A mãe que chovia) high in the air like a World Cup trophy, he is a gifted communicator who shapes commentary with feeling and packs dramatic tension into his silences.  It is no surprise that his name and image are present wherever contemporary Portuguese literature is discussed.  A photo of Peixoto promoting his 2011 collection of previously published chronicles, Abraço/Embrace) shows him affectionately hugging his book.

His texts are lightning rods of sensibility.  Page after page of narration is charged with vitality, mystery tinged with primal violence, tenderness, and fates that emerge uncontrolled from the rural landscape.  Voices criss-cross in Peixoto’s fiction, freely mixing words from past generations with those in the present.  Such utterings fracture and twist chronological time in his stories.  They willingly blur character identification.  The effect in his haunting early books (Nenhum Olhar/The Implacable Order of Things, Uma Casa na escuridão, Cemitério de Pianos/The Piano Cemetary) is kaleidoscopic, 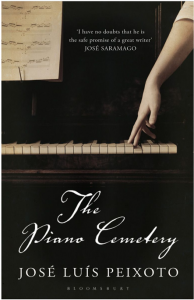 surreal, and sometimes Gothic in its other-worldliness.  His voices are as unrelenting as the heavy-metal music he discovered as an adolescent when it found its way to his remote village.  Even the whispers register in high decibels.

Peixoto presents emotion so impulsively that the reader is left to ponder its sense and revel in the powerful forces he sets in motion.  However you interpret his work, there is no doubt that he reaches deep into his intimate self for the words he offers readers:  “We live for others…we live because of others…we live in others…Writing is for others…”  Repetition and insistence are two of his trademarks.

José Luís Peixoto was born five months after Portugal’s Carnation Revolution of April in 1974.  He calls the end of the Salazar dictatorship the most important moment in the last fifty years of Portugal’s history and the catalyst for profoundly changing Portuguese society.  Such influences extended all the way to the tiny rural Alentejo village of Galveias where he grew up.   “My entire generation is linked to that time, Peixoto notes.  Everything came to us from the outside.”

He calls his the “absent generation” because unlike such prominent Portuguese writers as José Saramago and António Lobo Antunes, it didn’t actively participate in the colonial wars, the massive emigration to France, or the social unrest that marked the end of the dictatorship.  However, he has been anything but absent on the contemporary literary scene for the last decade and is one of the significant voices in a “new wave” of Portuguese contemporary writers.  He admits the country’s unprecedented opening to the modern world shaped his generation, its effect even more notable given the relative homogeneity of Portugal with the oldest borders in Europe and unifying religion and language.  The coming to age of his generation at the end of the 20th century provides an unprecedented opportunity for commentary on this essential period.

Peixoto seizes that unique perspective in his recent novel O Livro, (The Book), by taking on a previously unexplored literary subject: the exodus of 15% of Portugal’s entire population to France during the 1960’s.  O Livro resonates with his own family history, and he unabashedly calls it a “patriotic novel.”  He is quick to affirm his admiration for his country’s recent history, making clear his intentions to render homage to the heroic sacrifices of the period.  “The improvements and changes in Portugal after the dictatorship are incalculable.  All the influences came into the country that had been kept away from us for so long.”  Pride about Portuguese identity is a distinguishing characteristic in José Luís Peixoto and notably found in other writers of his generation.

O Livro is an ambitious work not only in its manifest social theme but also because of its innovative narrative strategies and two-part form.  A quasi-biblical title, O Livro opens with a mother placing a book in the hands of her son.  While the first section chronicles the travails of poor, rural Portuguese emigrants fleeing Portugal and struggling for survival in Paris, the second part is a tour de force in narrative experimentation told by a narrator who was born on April 25th, the day the conservative dictatorship was overthrown.

José Luis Peixoto’s writing abounds with rural sounds and colors.  He has lived half his life in Alentejo and the other half in Lisbon, but he connects deeply with his native Galveias.  He notes that his region is forever changed by modern influences yet it still feels like another world when he returns.  “The whole situation is kind of ‘bipolar’,” he suggests humorously, “constantly oscillating between the old and the new.”  He draws on and probes this duality constantly, sometimes with an air of nostalgia.

An example is his recent chronicle called Branco Incandescent (Incandescent White), a brief memoire about the women in his village white-washing the walls of the Alentejo country-houses.  In the shade and cool interiors of those same dwellings whose walls undulate because of the many layers of white-wash, he evokes the vitality of countrywomen as remembered by a young boy and the music of the women’s voices as they rest under a peach tree.  This is how language is carved in the heart.  It is about an intensity of light and clarity of memory so blinding, only words can hold what, as an adult, he can no longer see.  This is Peixoto in his element, evoking sensation in all its detail and embracing the reader as he reaches for worlds past and present. 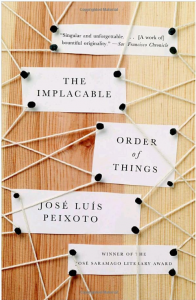 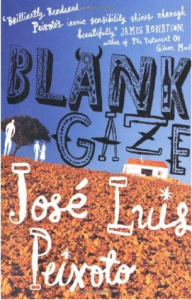 "Nenhum Olhar" translated in the UK as "Blank Gaze"

Peixoto is a contemporary writer marked by rural traditions.  The clash between old and new is the heart of his writing, and he tells it like an oracle destined with the task. He animates a dynamic blogspot, speaks several languages, and has recently collaborated with the slick travel magazine Volta ao mundo to provide running commentary on a trip that took him to Moscow, Beijing, and Miami.  He promotes his books and reads to audiences from Los Angeles to Sao Paulo.  Nenhum Olhar/The Implacable Order of Things, his first novel, has just been released in e-book version.  His rock star look with multiple body piercings is comfortable in front of a camera, and he has collaborated with a Portuguese heavy-metal band on a recent album.  With similar ease he describes timeless rural feasts such as the “killing of the pig” and the urban emptiness of amorous separation.

Peixoto’s first prose work Morreste-me/You Died on Me is a son’s painful soliloquy to his dead father.  A single, grieving chant emanating from the Altentejo’s dust, Peixoto’s first publication is full of penetrating long shadows cast by the white houses and the faces of their enduring inhabitants.  In this aching and touching memoire there is no reasoning possible: 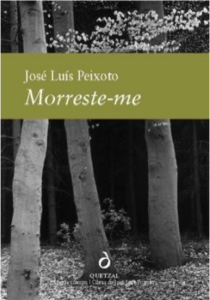 … when your eyes, clear with mist and fresh distant swells, swallowed this newly cruel light, when your eyes spoke aloud and the world wanted no more than to exist..  By chronicling the father’s sickness, death, and absence, the son indelibly inscribes his own trajectory beside him, assuring they will remain close.  The text advances by incantation and impulse until the son finds consolation in the end by exchanging his words with a memory of his father’s reassurances.  It is significant to note that Peixoto initiated his publishing career with this work.  In one long breath Morreste-me is eulogy and catharsis, a writing birth from death:  …And all of this is now too little to contain you.  Now, you are the river and the waterfront and the spring; you’re the day, and the afternoon inside the day, and the sun inside the afternoon; you’re the whole world because you are its skin. Dad.

Peixoto writes emotional puzzles in images, sound, and sense.  He casts a flashlight beam in a labyrinth of feeling.  He is a poet with stories to tell and a performer smack in the midst of his dramatic moment, freely mixing forms as sensations churn similarly in him:  For all the morning that still exists, with a gaze you maintain, long as the distance between earth and sky, fresh luminous like I once was, smoothly luminous like this spring is gentle smooth all morning long.

YOKNAPATAWPHA is tattooed in large letters the length of José Luís Peixoto’s right forearm.  It is one of several markings and the most notable with regards to literature because it is the name of the fictional country where American writer William Faulkner locates his stories.  Peixoto says he has never visited Mississippi, but he has been to Faulkner’s imaginary Yoknapatawpha.  Though the Alentejo is geographically real, if one has never been there they might say the same after reading Peixoto’s work.  He shares more than an affinity for rural subjects with Faulkner.  Peixoto’s unconventional mixing of time and the wilful melding of concrete and figurative description share some similarities with Faulkner’s work from stylistic and structural perspectives:  a house’s memory speaks like a family member, monster giants and ghosts mingle with villagers… a voice shut inside the trunk ceased forever, with neither the meaning nor the silence of its words remaining.

His first novel, Nenhum Olhar, (The Implacable Order of Things) immediately grabbed literary attention and earned him the prestigious Saramago award.  Portugal’s Nobel laureate called him “one of the most surprising revelations in recent Portuguese literature.”  Elliptical and surrealistic, the novel blends the voices of two generations of Alentejo peasants, people named Master Rafael, Old Gabriel, Judas the shopkeeper, and Salomão; twin brothers joined by the tips of their little fingers named Elias and Moisés.  When one falls in love with a cook, flesh must be cut to separate them.  The village dance is a sombre struggle rife with hunger, curses, and destiny.  The devil and superstition are the leaders of the ironic and grotesque tale where spirits mingle freely with peasants.

Most of Peixoto’s writing can be described in two shades, one luminous the other sombre.  His fiction flows with a torrent of dark fates, collisions between reality and imagination, domineering obscure forces, and a panoply of trials for the long-suffering characters that all appear to be direct descendants of Job.  Only sparse moments of tenderness and the raw beauty of the rural landscape tempers an otherwise gruelling and violent existence.  Physical desire for his fictional characters is as overwhelming and uncontrollable as the torrid climate that hardens the ground.

In contrast, his non-fiction chronicles, memoires, and poetry are often brilliantly lit images of noble endurance, desire, affection, and care.  The figures, though still potent with mystery, appear empowered in these worlds ordered by memory and organized poetically.  Even in harsh experiences they are unequivocally life affirming.

Words for all Peixoto’s work spring from the same emotional landscape but gravitate towards different perspectives depending on the form in which he chooses to channel them.  Perhaps his non-fiction and poetry holds so much light and tends to make heroes rather than victims of its subjects (even those who suffer) because it describes true occurrences with fidelity rather than an invented world.  Conversely, his fiction probes such obscure shadows because its mask of invention allows him to reveal a different truth.  Light and dark.  Both are Peixoto.

(*) Richard Simas is a free-lance writer with a background in literature and the performing arts. He contributes regularly to contemporary arts and literary review in Europe and in North America, including Canada’s Journey Prize anthology and a winner of a Fiddlehead Fiction Prize. He is a frequent collaborator for Musicworks magazine in Toronto.

Richard Simas’ text on José Luís Peixoto is part of a series of portraits of 4 contemporary Portuguese writers.  The project has received the support of Portugal’s Institute Camões and The Québec Arts Council.