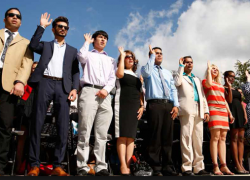 Prime Minister António Costa has reiterated that Portugal needs to attract more immigrants to address a crisis in demographic decline due to an aging population.

Portugal’s birth rate is one of the weakest in the European Union, with more than a fifth of the population aged over 65 years.

Portugal has also lost population to emigration. Nearly half a million Portuguese have left the country either permanently or temporarily in the last four years.

Data collected in 2017, released in a study by the Francisco Manuel dos Santos Foundation, reveals that Portugal needs to admit around 50,000-75,000 new immigrants per year to boost its declining active population.

The study concludes that, while other European countries are limiting the entry of migrants, Portugal is emerging as a country welcoming foreign workers; without the admission of new immigrants, Portugal will lose, by 2060, 40% of its active population, dropping from 10.5million to 8.6 million residents.

To expedite the process of attracting foreigner workers, the government is drafting a new “regulatory decree” to amend the current immigration law, granting residence permits to foreign workers who obtain a “promise” of work employment contracts.

Other policies include attracting highly qualified managers for fundamental sectors of the economy. In 2016, alone the country admitted more than 60,000 new residents, including over 23,000 foreign college students.

Portugal has also eased the law of naturalization by allowing children born in Portugal to foreign parents, to acquire Portuguese citizenship at the time of birth if their parents have been in the country for at least two years.