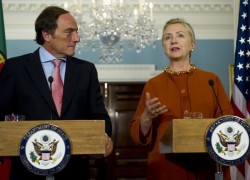 In her opening statement, Secretary Clinton remarked that the economic challenges now facing Portugal and Europe were the main topic of their conversation.

She said, “I want to say very clearly that the Portuguese people and the Government of Portugal have demonstrated impressive resolve in putting aside political differences to implement difficult austerity measures that are helping to stabilize the Portuguese economy, but also to set it up for long-term economic success. As I expressed to the foreign minister, the United States will stand with Portugal as it continues to make economic reforms that return Portugal to a path of growth and sustainable opportunity for the Portugal – Portuguese people.”

In his opening statement, after reiterating that Portugal and the United States are old and good friends, Paulo Portas said the aim for the visit was to reinforce bilateral cooperation and to express Portugal’s views regarding some of the major global issues.

Regarding the current challenges Portugal is facing, to fulfill the program with the European Union and the IMF, the Portuguese Minister of Foreign Affairs said he was confident that “In the end of this very tough program, Portugal will be a success story. And we want Portugal seen in the international scene as unique story: Portugal delivers. Portugal honors its word and is making a tremendous effort to recover its autonomy.”

During the 45 minutes meeting, the US Secretary of State and Paulo Portas also addressed the stituation in the Middle East, the Palestine issue and the global financial crisis.

This was the first official visit to Washington for Paulo Portas.  Following the June 5 elections, he became the Minister of Foreign Affairs and State of Portugal in a coalition government between the PSD and the CDS-PP, and Pedro Passos Coelho, 46,  the leader of the Social Democrat Party (PSD), was sworn Prime Minister of Portugal.