Portuguese workers to protest on May Day – update 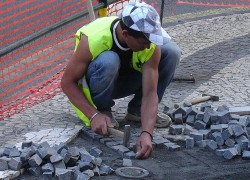 Portugal’s labor unions are mobilizing workers to protest nationwide on May 1st against the new austerity measures to be announced as part of the bailout negotiations with the European Union, the European Central Bank an the International Monetary Fund, for an estimated €80 billion.

The protests are being organized by the two largest national coalitions of labor unions, the CGTP representing 727,000 workers in 81 unions, and the UGT with about 500,000 members in 58 unions.

Labor leaders are against additional austerity measures such as privatization plans, further tax increases and changes in pension policies that they believe will worsen the social well-being of the general population and place the country in a much worse situation.

Labor coalition leaders have already stated that, besides the protests being planned for May Day, they will further mobilize workers for a general nation-wide strike to protest against additional austerity measures.