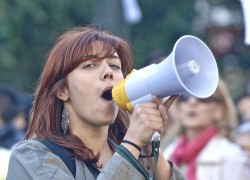 Hospital services, schools, courts, public offices, trash collection an many other public services have been disrupted Friday, in Portugal, by public workers on a 24 hour general strike organized by the National Federation of Civil Service Unions, the biggest disruption in the country in two decades.

Workers are protesting against austerity measures resulting from a US$115 billion bailout agreed between Portugal, the European Union, and the International Monetary Fund. Workers are voicing their anger against freezing pay, tax increases, changes in pension policies and other social benefits.

Air traffic workers in Portugal staged a two hour slowdown on April 27 and May 4 in the five major cities of Lisbon, Porto, Faro, Ponta Delgada and Funchal. Similar strikes are scheduled for May 11 and 18. Labor unions have also called for workers to stage a mass protest scheduled for May 19.

Protests are being organized by the two largest national coalitions of labor unions, the CGTP representing 727,000 workers in 81 unions, and the UGT with about 500,000 members in 58 unions.