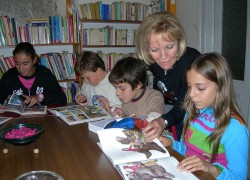 Portugal holds one of the highest school dropout rates in the world with 37.1 percent of students abandoning school before graduation — but a recent report released by  the Organization for Economic Co-operation and Development (OEDC) revealed that Portuguese 15-year-olds students made the biggest overall improvement in reading, math and scientific skills from 2006 to 2009 compared with students from other developed countries.

The tests showed Portuguese students had made similar improvements in math and scientific literacy to rank close to the OECD average, a sharp improvement from a previous position close to the bottom of the table

Yet the Wall Street Journal reported recently that school dropout  is endemic in Portugal,  the poorest countryand the least educated in Western Europe. Just 28 percent of the Portuguese population between 25 and 64 has completed high school — compared with 85 percent in Germany, 89 percent in the Czech Republic and 89 percent in the U.S.