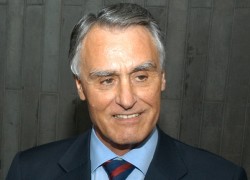 Portuguese President Anibal Cavaco Silva will visit Florence and Genoa, in Italy, Wednesday and Thursday of next week.

In Florence he will give a public lecture about current European affairs at the European University Institute (EUI), while in Genoa he will participate in a meeting of COTEC Europa.

This is the second time President Cavaco Silva visits the EUI, where he gave a “Jean Monnet Lecture” on the topic of European identity in 1989.

In 2011, he won the presidential election for the center-right Social Democratic Party (PSD) with 56% of the votes.

President Cavaco Silva holds a degree in finance from the Lisbon Higher Institute of Economic and Financial Sciences (ISCEF) and a doctorate in economics from the University of York (UK). He lectured at the ISCEF and was Professor at the Faculty of Economics in Lisbon New University as well as at the Portuguese Catholic University. During his academic career he published widely on subjects of international finance and economic and monetary policies.

He has been awarded several renowned international prizes and honorary degrees from various universities.

The EUI lecture, to be delivered in Portuguese with simultaneous translation in English and Italian, is scheduled for 5:30pm (local time) live streamed >>