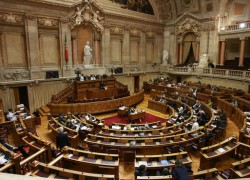 The Portuguese Parliament approved Wednesday the final draft of the proposed Government budget for 2012. The document was approved with the vote from the majority governing coalition comprised of the Social Democrats (PSD) and Christian Democrats (CDS-PP). The coalition has 132 seats in the 230-seat Parliament.

The Socialist Party (PS) in opposition abstained from voting on the budget, while the remaining minority opposition parties, PCP, BE ad ENP voted against it.

According to the Portuguese Constitution the bill will be submitted to the President of the Republic Cavaco Silva to sign into law or veto within the next 20 days. The President who has the power to dismiss the goverment, dissolve parliament or veto legislation, is unlikely to  veto the coalition goverment bill.

For Finance Minister Vitor Gaspar, 2012 will be the hardest year for Portugal’s economy, but he said, “With everyone’s commitment and the good character that we Portuguese have shown throughout our history, I am confident we will succeed in this national challenge.”

The approved budget includes a sharp cut in public sector wages, cuts in social services such as welfare, health and education, and a new round of tax hikes in products and services such as income tax, sales tax, corporate tax and property tax which will increase from January 1 of next year.

Among the most controversial measures is the decicion to suspend for two years the vacation and Christmas bonuses for tens of thousands of public employees and pensioners.

The austerity measures will not save the country from entering into a deeper recession with an economy expected to contract 3% next year, and an unemployment rate projected for 13.6%. Currently the jobless rate stands at 12.9%.

According to Finance Minister Vitor Gaspar the cuts were needed “to restore the confidence of the Portuguese people, the markets and our international partners.” He also said the budget would help put the country back “on the path to sustainable development.”

The measures were necessary to cut the country’s deficit to 5.9% of gross domestic product this year and 4.5% next, from 9.8% in 2010 under the terms of the 78 billion-euro emergency loan program agreed last May with Brussels and the IMF. Further installments of the emergency loan program could be withheld if Lisbon does not meet targets for deficit reduction.