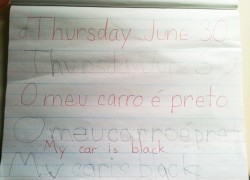 Portuguese teaching at the heritage language schools in the United States and Canada may be compromised if Lisbon-based Instituto Camões decides not to renew teachers’ licenses, reported Lusa news agency.

In a comment to Lusa, Ana Paula Laborinho, President of Instituto Camões, said the institution “is unable to resolve this matter” and referred the matter to the Ministry of Education and Science (MEC).

In a letter directed to the President of the Camões Institute, Dinis Borges points out that the decision of not renewing the teachers’ licenses is “unjust, incomprehensible and even unacceptable and discriminatory.” He said the decision will affect eight teachers in the United States and 14 in Canada,

He also said that the problem has been going on since last year and that at the time he was informed that the Intituto Camões and the Ministry of Education were seeking a solution.

According to him, these teachers are not directly dependent on the Institute Camões or the Ministry of Education, because they are paid directly by the Portuguese heritage language schools in the communities where they teach.

“These teachers are fulfilling a service by teaching Portuguese abroad with the same importance, professional zeal, dedication and commitment as their colleagues in Europe and Africa, offering courses officially recognized by the Ministry of Education,” said Dinis Borges.

For him the decision is “incomprehensible” since it is well known that these teachers do not add expenses to the Portuguese government. Indeed, according to Dinis Borges, the teachers in question pay taxes in Portugal over their salaries paid by the Portuguese communities in the in the United States and Canada.
paj.cm