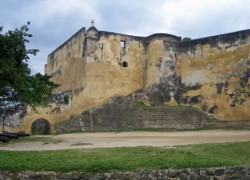 UNESCO has named the Fort Jesus in Mombasa, Kenya, as a World Heritage site. The monument with “exceptional universal value” was added to UNESCO’s list of sites on Monday, June 27.

The United Nations organization described the fort as “one of the most notable and best preserved examples of 16th century Portuguese military fortifications and a historic landmark of this type of construction.”

The Fort’s layout and form, designed by Giovanni Battista Cairati, reflects the Renaissance ideal that perfect proportions and geometric harmony are to be found in the human body.

The Fort was built by the Portuguese between 1593 and 1596 to protect the Indian Ocean port. The fort was lost and reconquered several times until the Portuguese finally abandoned it in 1729. Between 1837 and 1895 the fort was ocupied first by Oman, followed by Zanzibar, and was used as barracks for soldiers. When the British protectorate was proclaimed on the 1st of July 1895, the Fort was converted into a prison. In 1958, the Fort was declared National Park and became museum in 1962. The property covers an area of 2.36 hectares and includes the fort’s moat and immediate surroundings.

The Fort Jesus museum was built with a grant from the Portuguese Gulbenkian Foundation. The exhibits consist of finds from archaeological excavations at Fort Jesus, Gede, Manda, Ungwana and other sites.

Four sites are in Asia: the Ancient villages of Northern Syria (Syrian Arab Republic), the Cultural Sites of Al Ain (United Arab Emirates), the Persian Garden (Iran), and Citadel of the Ho Dynasty (Vietnam); three sites are in Europe: the Cultural Landscape of the Serra de Tramuntana (Spain), Pile Dwellings around the Alps (Switzerland, Austria, France, Germany, Italy, Slovenia) and Selimiye Mosque and its Social Complex (Turkey); the other site is in Africa: Konso Cultural Landscape (Ethiopia).

Fort Jesus Museum in the inner courtyard of the fort in Mombasa, Kenya.