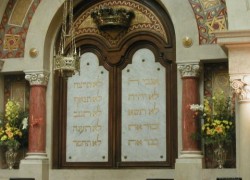 The nearly five thousand Jews living in Portugal today are marking the beginning of Yom Kippur, a religious celebration that starts at 6pm on October 7 and lasts until sundown on Saturday, October 8, with a fast and periods of intense prayer.

Yom Kippur marks the ten days following the start of the Jewish New Year, and are marked by “a lot of introspection and reflection,” Mucznik said.

“During the 10 days preceding the Yom Kippur, Jews open the book of their life. Reflect on their sins and ask forgiveness from God and those who they have wronged. Yom Kippur is the day that God delivers his judgement,” he said.

Currently, according to Mucznik Esther, the Jewish community in Portugal is made up of about five thousand people.

It is believed that the first Jews settled in the Iberian Peninsula at the time of Nabucodonosor, King of the Chaleans (6th century) or even before, at the time of Solomon who reigned in Israel from 974B.C. to 937B.C. In the 12th century, when the kingdom of Portugal was formed, there were already a number of important Jewish communities in the territory.

In 1497, when King Manuel I of Portugal decreed that all Jews had to convert to Christianity or leave the country, hard times followed for the Portuguese Jews, with deportation, exile, persecution and death. As of the present time, Jews are welcome in Portugal where they enjoy a peaceful life.