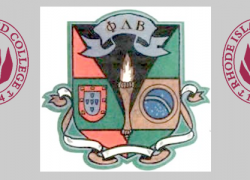 The induction ceremony began with a keynote address titled “Every Voice Matters: The Value of Dialect Study in Portuguese Linguistic Research” by David Silva, professor of linguistics, provost and academic vice president at Salem State University in Massachusetts. A researcher of Portuguese and Korean languages, his talk focused on negative attitudes regarding “Micaelense,” a Portuguese dialect from the island of São Miguel in the Azores.

He said, “Human beings have an innate grasp of the power that comes with belonging, especially when it comes to membership in multiple constituencies. With such an appreciation comes a tendency to permit (if not actively foster) multiple identities, identities that are outwardly expressed in terms of desire for variety in wardrobe, in pastimes and in behavior – including language.” He concluded by invoking Aretha Franklin and making a call for respect of all languages, in that “every voice matters.” 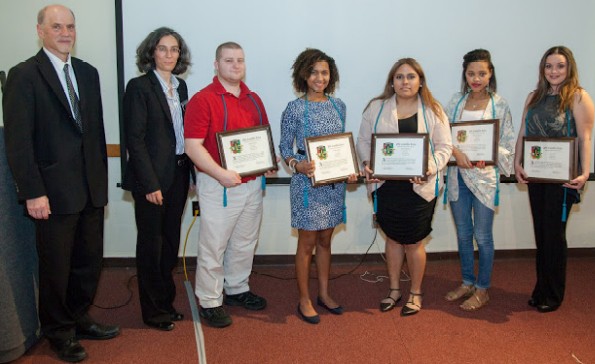 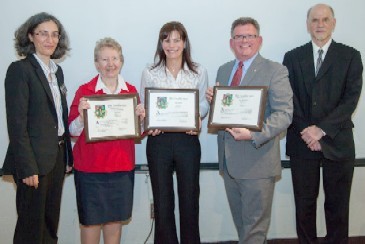 Among the 2016 honorary members of Phi Lambda Beta, recognized for their support of and contributions to Portuguese Studies and the community, was RIC President Nancy Carriuolo. Oliveira stated that, “we do not honor [President Carriuolo] this afternoon for her numerous degrees, awards, accomplishments or achievements of which there have been many throughout her career. She is honored today with induction into the Portuguese Honor Society because of her abiding support and commitment to the Portuguese Studies program here at RIC and to the Portuguese and Lusophone community.”

Also inducted were Silva, who delivered the keynote address and Embaixatriz Kim Sawyer, executive director of US Embassy Lisbon’s Connect to Success program, aimed at strengthening and growing women-owned businesses in Portugal. Sawyer delivered the keynote address earlier at “How to Connect to Success,” a business luncheon, networking event at RIC for School of Management students, faculty and local businessmen and businesswomen invited by the Institute for Portuguese and Lusophone World Studies. 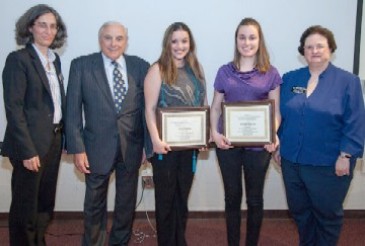 Marie Fraley, director of the Institute for Portuguese and Lusophone World Studies introduced the 2016 recipients of the John A. and Mary V. Lima Scholarships: Bianca Barros, B.S.N. in nursing with a Portuguese minor and Lelia Noble, B.A. in modern languages-Portuguese. The scholarships in the amount of $2,000 each are funded by the endowment established by the late John A. Lema Jr. in memory of his parents. Awarded annually to students who demonstrate high academic achievement, community service and a commitment to studying Portuguese at RIC, the fund has awarded a total of $22,300 since 2010. The awards were presented by Judge Robert Silva on behalf of himself and Dr. Anthony Caputi, trustees of the John A. Lema Jr. Charitable Trust.

Established in 1854, Rhode Island College serves approximately 9,000 undergraduate and graduate students through its five schools: the Faculty of Arts and Sciences, the Feinstein School of Education and Human Development, the School of Social Work, the School of Management and the School of Nursing. For more information, visit www.ric.edu.