Portuguese have the most positive image of the United States – Survey 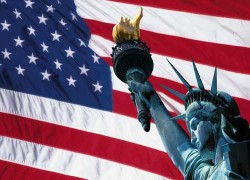 Portuguese nationals in Europe have the most positive image of the United States and like most European Union citizens they believe the United States should exert strong leadership in world affairs, revealed the annual “Transatlantic Trends 2011” public opinion survey.

On the issue relating to having a favorable or unfavorable opinion about the United States exerting a strong leadership role in world affairs, Portugal was in a prominent position with 81%, just behind the American citizens with 83%.

Countries that expressed most disapproval of Washington having a strong global leadership role were Turkey with 69%, and Spain and Slovakia both at 54%.

The survey shows a high transatlantic approval on how President Barack Obama is leading the fight against terrorism, with Portugal and Italy leading the survey with a large majority of respondents (81%) approving the policies of the US President, compared with 68% of respondents in the United States.

The study also revealed a strong transatlantic split regarding the concept of “necessary wars,” with 75% of participants in United States agreeing, compared to only 33% of European respondents approving — Portugal included.

The “Transatlantic Trends 2011” survey is a project of the German Marshall Fund of the United States and the Compagnia di San Paolo in Turin, Italy, with additional support from the Luso American Development Foundation (Portugal), the BBVA Foundation (Spain), Communitas Foundation (Bulgaria) and the Swedish Ministry of Foreign Affairs.

The survey was conducted between May 25 and June 11, 2011. About one thousand respondents in each country participated. The countries surveyed included the United States, France, Germany, United Kingdom, Italy, Netherlands, Poland, Portugal, Spain, Slovakia, Turkey, Bulgaria, Romania and Sweden. The study will be released in full on September 14.