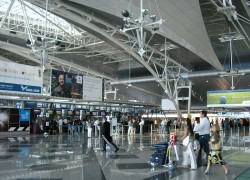 A survey by the European statistical agency Eurostat revealed that when compared to the European Union average, the buying power in Portugal was 81% or 20% less than the member states.

The survey also revealed that the Gross Domestic Product (GDP) per capita, expressed in purchasing power standards (PPS), varied from 43% to 283% among the 27 European Union (EU27) member states.

The Netherlands was about one third above the average, while the highest level of GDP per capita in the EU27 was recorded in Luxembourg.

Greece, Slovenia, Malta, and the Czech Republic were between 10% and 20% lower than the EU27 average, while Slovakia was around 25% below. Estonia, Hungary, Poland, Lithuania and Latvia were between 35% and 50% lower, while Romania and Bulgaria were around 55% below the EU27 average.

According to another survey by the international market consultant GfK Portugal, an estimated 43% of Portugal’s work force was looking for a new job and more than one-quarter were open to emigrating.

The survey revealed that among the 29 countries studied, Portugal was placed ninth in terms of the readiness to cross borders in search of better employment.

According to the study, of the 43% workers looking for a job change, 27% were willing to emigrate — 42% of them with a college education. Among respondents aged 18 to 30, 40% were willing to cross borders.

More than 23,700 Portuguese emigrated last year. It is the second largest emigration wave since the beginning of the millennium surpassed only by the 26,800 emigrants registered in 2007.