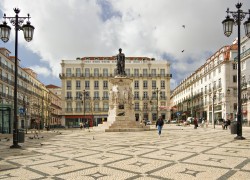 Prime Minister José  Socrates has warned the country could face a bail-out. “The consequence of a political crisis would worsen the risks for our economy,” he said.

Along with the lower rating, Moody‘s gave Portugal a negative outlook, which means that more downgrades could be on the way.

The Portuguese economy grew 1.4% in 2010 driven by exports, but started contracting again in the fourth quarter. Fiscal tightening is expected to pull the economy further down in 2011.