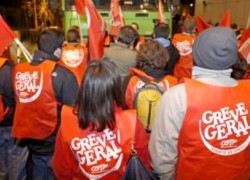 Portugal’s center-right government is determined to continue with its austerity program despite Thursday’s general strike, record low approval ratings and opposition demands for it to resign.

The government is unlikely to deviate from its highly unpopular policies, let alone collapse, as it enjoys a comfortable majority in parliament and national elections are not due for another two years.

Prime Minister Pedro Passos Coelho said that while his government respected the “inalienable right to strike,” what the country needs are “fewer strikes and more work and rigor.”

Although largely confined to the public sector – transport and health services in particular – the strike was still a powerful reminder of the depth of resentment and unrest in the country. “Enough of impoverishment and exploitation” was a common theme during demonstrations.

Across all sections of the community there is anger over the spending cuts and tax hikes imposed because of  the €78 billion bailout requested by the Portuguese administration in 2011.

As Portugal struggles to meet the fiscal targets of the bailout, it is experiencing the third year of its worst economic recession since the 1970s. Analysts expect the economy to contract 2.3 percent this year after a 3.2 percent slump last year.

While protesters accuse the government of intransigence over its austerity program, there is no clear agreement on a cogent alternative strategy. The closest so far was a joint statement at the beginning of the week from the heads of four national business confederations, covering industry, trade and services, tourism, and agriculture. They called for lower taxes that might allow companies to resume investment and permit households to start spending again. 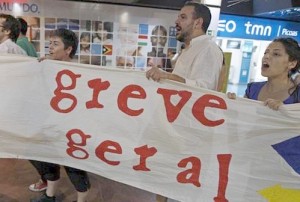 The two main unions behind the general strike were the General Confederation of Portuguese Workers (CGTP) and the General Union of Workers (UGT). Together they represent about a million workers.

The UGT leader, Carlos Silva, declared: “We say no to the dictatorship of the Troika – that is what we are rebelling against.”

On one of the hottest days of the year so far, many young people reportedly chose to go to the beach rather than attend street protests in support of the strike.

Unemployment and the dismal outlook for the country’s youth were among of the main worries underlying the latest protests. With unemployment almost at a record 18 percent among the working population in general, youth unemployment (under 25-year-olds who are not studying) has soared to about 43 percent. Meanwhile, young people, including graduates, are leaving in droves to seek jobs and a better life abroad.

Among the government’s fiercest critics is elder statesman Mário Soares. The former Socialist prime minister and president, who came to prominence after the 25th April revolution, recently told the Portuguese daily newspaper Público: “Right now, we are a pseudodemocracy because democracy needs to have people who solve problems.” He accused the present government of “ignoring the people” to such an extent that “democracy is in danger.”

There is no end to the bad news in sight. The government’s plans include increasing working hours and monthly pension deductions while laying off almost 12 percent of state employees.