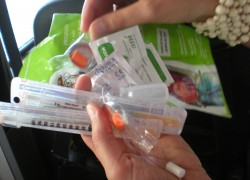 Rather than criminalizing drug users, people found in possession of drugs are sent to a “dissuasion commission” or “dissuasion board” for treatment by social workers and psychologists.

The result is that Portugal now has one of Europe’s lowest lifetime usage rates for cannabis and heroin abuse. Drug use among teens has declined; rates of HIV infections caused by sharing used needles have dropped; and the number of drug users seeking treatment has more than doubled.

Portuguese police now focus their attention on high-level dealers rather than small-time operators while an estimated €400 million-euros ($573.5 million USD) has been taken out of the illegal drugs market.

Portugal’s drug policy success story has caught the attention of many world leaders and world organizations. As result, the Global Commission on Drug Policy is now advocating for the decriminalization of the so-called ‘war on drugs’.

In the United States, the Cato Institute has issued the Cato Report entitled “Drug Decriminalization in Portugal: Lessons for Creating Fair and Successful Drug Policies” showing how drug use has dropped over the last decade in Portugal.

In their conclusions the Cato Report states, “By freeing its citizens from the fear of prosecution and imprisonment for drug usage, Portugal has dramatically improved its ability to encourage drug addicts to avail themselves of treatment. The resources that were previously devoted to prosecuting and imprisoning drug addicts are now available to provide treatment programs to addicts.”

Founded in 1977, the Cato Institute is a public policy research organization — a think tank — dedicated to the principles of individual liberty, limited government, free markets and peace. Its scholars and analysts conduct independent, nonpartisan research on a wide range of policy issues.