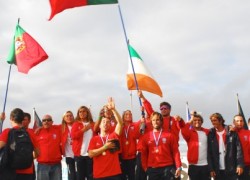 Portuguese surfers, competing in Bundoran, Ireland, won the European Surfing Championship for 2011. The event was held September 23 to October 2.

In an ironic twist, Portugal was also awarded the trophy in 1997, the last time that the event was held the Irish seaside town, located in the North West of Ireland.

Irish surfer Ashleigh was narrowly beaten by Portugal’s Catarina Sousa by a mere 0.07, followed closely by Gemma Harris (Wal). However Ashleigh was still happy to claim Ireland’s only medal in the competition – a silver.

The Portuguese team won in 3 of the 7 different categories, two 2nd places, one 3rd and one 4th. The only category in which Portugal did not place was Longboard.

Thousands of spectators gathered along Bundoran’s Tullan Strand to watch the competition with 15 Euro nations represented.

The 10 day contest highlighted the best professional and amateur surfers throughout Europe. It is the third time Bundoran held the European Surfing Championships. Previous competitions were held there in 1985 and 1997. Since its beginning the title has been passed between England, Spain, Portugal and France, who are the current title holders.