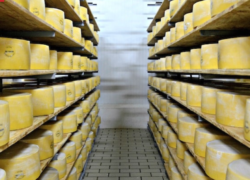 The United States has begun to levy 10 to 25% taxes on European exports. The action is affecting the import of products from Portugal.

Among the most affected are cheeses from the Azores with many importers cancelling orders due the increase in customs taxes.

According to the US administration, the tariffs were in retaliation for aid given to Europe based Airbus that allegedly received illegal subsidies from Britain, France, Germany and Spain. As a result, the WTO agreed that the United States could impose punitive taxes against certain European products.

This week, at a meeting with European Commissioner Phil Hogan, in Brussels, Portuguese Agriculture Minister, Maria Albuquerque, expressed particular concern about the impact of US taxes on Azorean cheese imports.

“I had the opportunity to draw attention to the problem of the increase in customs duties, which arises from the commercial conflict with Airbus and affects in particular the export of São Jorge cheese from the Azores to the United States,” she stated.

The minister also said she had asked the Commissioner for a joint action to overcome the situation.  The minister stressed that “the islands cheese exports are quite large” and that Washington’s actions are already impacting negatively the cheese industry on the islands.

“In the light of the US administration’s decision to increase customs duties and tariffs on various European products, it is important, within the framework of the European Union and bilateral relations, that measures are taken to negotiate exemptions for Azorean products, given the limited impact that they have in the US market,” said Secretary of Agriculture of the Azorean executive, João Ponte.

In October, the United States imposed tariffs on a record $7.5 billion of European Union exports, after the World Trade Organization (WTO) ruled in favor of the US economic sanctions. Exports affected a broad range of products, from airplane parts to cheese, meats, olive oil, fruit juice, jelly, seafood, wine and textiles.

Earlier on June, the European Union had imposed import duties of 25% on a $2.8 billion range of imports from the United States in retaliation for US tariffs on European steel and aluminum. Targeted products include Harley-Davidson motorcycles, bourbon, peanuts, blue jeans, steel and aluminum. Following the initial bilateral actions, tariffs are set to rise further.

Tariffs are a tax on imports, levied by governments to raise revenue and/or exert political leverage over another country or countries. They are paid by importer firms to customs (government) for the goods they import. Importers often pass the costs of tariffs to costumers by raising consumer prices. They can cause higher prices, hurt consumers, reduce trade among countries, and hurt the overall economic growth of the countries affected.

Spain’s economy will be hit the hardest by the tariffs, because the US is the largest non-European market for Spanish agricultural exports like wine, oil, cheese, and olives, all of which are likely to be targeted.