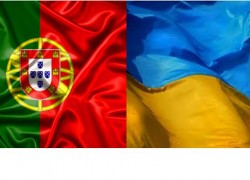 Ukrainians living in Portugal say they want peace, democracy and the rule of law in their homeland. They condemn Russia’s President Putin for ‘interfering’ in the current crisis there.

“Ukraine is opposed to the rule of force, intimidation and provocations from President Putin’s side,” Pavlo Sadokha, president of the Association of Ukrainians in Portugal, told us.

Members of the association have been holding regular protest demonstrations outside the Russian Embassy in Lisbon. These seem set to continue in the run-up to the referendum in which the people of the Autonomous Republic of Crimea will be asked if they are in favor of becoming a constituent territory of the Russian Federation and restoring Crimea’s 1992 constitution.

“We are going do everything we can to wake up public opinion and the political establishment in order to stop Putin’s aggression and interference in Ukraine,” said Mr. Sadokha. His association is organizing rallies and collecting money to help victims of the crisis.

Mr. Sadokha contended that misinformation was being disseminated about the current situation and that some sources were exaggerating divisions.

“First, the Ukrainians are united against Yanukovych’s dictatorship. Now Putin’s aggression has united Ukrainians in an unprecedented way, without regard to language, religion and origin.

“There is a small percentage of people supporting Russia as can be seen in Crimea, but even there a huge part of the population is opposed to the aggression and Anschluss.

“This part of the population, including not only Crimean Tatars and ethnic Ukrainians, but also ethnic Russians, is being intimidated and silenced under threat of weapons and physical violence.”

There are about 45,000 Ukrainian expatriates living in Portugal, in addition to the 10,000 who have taken out Portuguese citizenship. They represent the second biggest immigrant community after Brazilians.

Ukrainians have been immigrating to Portugal over the past 20 years because of the economic hardship and massive unemployment that followed the break-up of the Soviet Union at the end of 1991.

They have been attracted by jobs, particularly in the construction industry, and favorable immigration legislation. After the bloodless Orange Revolution in 2004 against a rigged run-off election and amid rising hopes of economic improvement, a number of Ukrainians returned home.

With the rise of austerity in Portugal, this country is not so attractive anymore and Ukrainians have been moving to better-off countries in the EU, including Germany, France and the UK.

Mr. Sadokha confirmed that Ukrainians living abroad not only keep very close ties with their families and developments back home, but hugely contribute to the Ukrainian economy through remittances.