Portugal: Syrian chemical arsenal to be transshipped via the Azores – Washington, DC 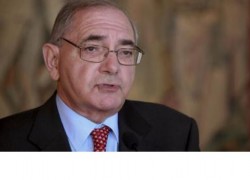 Portugal will allow the United States to use a port in the Azores for the transshipping of chemical materials from Syria, as an option, said the Portuguese Minister of Foreign Affairs, Rui Machete, in Washington, Wednesday.

In a statement at the end of a meeting with U.S. Secretary of State, John Kerry, he said that the issue was addressed “not specifically” but that Portugal was made available.

“We are willing to comply in solidarity with the international community,” Machete told Lusa news agency. The decision is in accord with “the mandate of the Security Council of the United Nations, which has the active cooperation of Russia, China, the European Union countries and the United States,” he said.

Earlier in the month, the United States had contacted the Portuguese Government regarding the transshipping of 500 tons of chemical materials from Syria via the port of Praia da Victoria, on Terceira island, Azores.

The US request follows the framework of Resolution 2118, adopted unanimously by the Security Council of the United Nations and with the approval of the Organization for the Prohibition of Chemical Weapons (OPCW), according to a statement by the Portuguese Minister of Foreign Affairs.

Accordingly, the chemical arsenal will be transshipped from a Danish vessel into a US vessel and dumped at sea, into the Atlantic Ocean, in international waters, outside the Portuguese Exclusive Economic Zone (EEZ).

The Portuguese Minister of Foreign Affairs is in Washington for meetings with US Secretary of State, John Kerry, for talks over maintaining in full operation the Lajes Air Field on Terceira Island, Azores, the main topic of discussion.

The Lajes Air Field, one of seven main operating bases under US Air Forces in Europe, would lose more than 400 military personnel and 500 family members. The decision could significantly affect the local economy, since more than 700 Portuguese civil workers at the US air field would lose their jobs. The US base is the island’s second largest employer.

The Lajes Air Field provides refueling and other support to U.S. military and NATO aircraft and crew members transiting over the Atlantic Ocean.