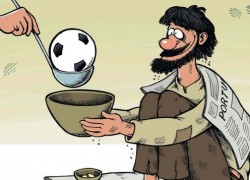 Portuguese cartoonist Rodrigo de Matos has won the “Press Cartoon Europe Grand Prix” with a cartoon published in Expresso, a Lisbon based weekly.

“Among the growing poverty and the hard austerity measures, the people of Portugal have found a reason to smile: the national football team qualifying for the World Cup in Brazil, 2014,” the cartoon reads.

The competition was sponsored by Press Cartoon Belgium to distinguish the best cartoons published in newspapers, magazines and websites based in Europe.

Matos, 39, was born to Portuguese parents in Angola. In Portugal, he studied journalism at Coimbra University. He currently lives in Macau, where his work has appeared in The Times of Macau and the newspaper Ponto Final.

“The PCE Grand Prix is probably the most important award for cartoonists who publish in European media. It’s the first time I’m selected for the final round and winning the main prize for me is almost unbelievable. This is my first big award and I achieved it with a lot of work and dedication, in the eighth year of my career as a professional,” the Portuguese cartoonist, who has been living in Macau for over four years, told The Times.

Matos will receive the Euro8,000 cash prize at the International Cartoon Festival in Knokke-Heist in Belgium. The second prize was awarded to Tjeerd Royaards and the third to Hajo de Reijger, both for cartoons published in the Netherlands.

The Press Cartoon Europe (PCE) is an initiative of the Press Cartoon Belgium (PCB) in association with the International Cartoon Festival held in Knokke-Heist, Belgium. The award ceremony takes place at the opening of the annual International Cartoon Festival and the preview of the exhibition of the nominated cartoons, in Knokke-Heist. The cartoons will also appear in a multilingual annual catalogue. 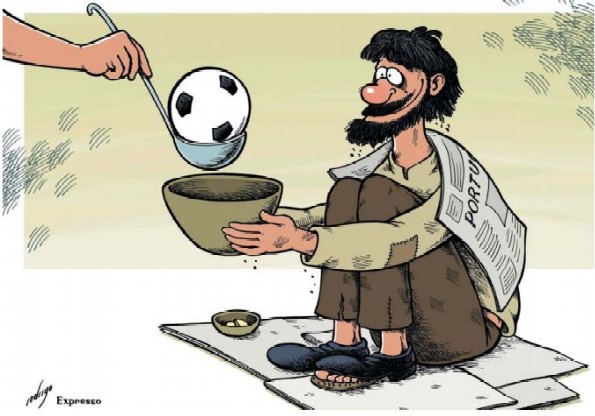 Among the growing poverty and the hard austerity measures, the people of Portugal have found a reason to smile: the national football team qualifying for the World Cup in Brazil, 2014