Portugal: Re-food ramps up its no-hunger effort across towns and villages – By Len Port 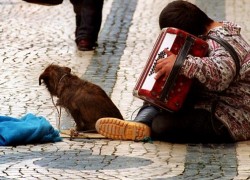 With the approach of Christmas comes the prospect of feasting on roast turkey and traditional Portuguese favorites such as marzipan cakes and bolo-rei. Sadly, not for everyone.

There are many people in cities, towns and villages across Portugal living in poverty, dependent on handouts from food banks and soup kitchens. The full extent of the problem is unclear, but it was probably greater this year than last and it may be worse again in 2015.

Only a few generations ago, food in Portugal was homegrown, seasonally plentiful and cherished for its wholesomeness.

With population growth and urban expansion, foodstuffs have become processed commodities, mass-produced and transported across continents for sale in supermarkets in vast quantities.

Abundance has given rise to immense wastage.

Amid today’s economic inequality and severe austerity, extravagance and gluttony co-exist with poverty and hunger.

Since the founding of the world’s first food bank in Arizona in 1967, food collection and distribution systems for the hungry have been set up all over North America and in other developed countries around the globe.

The need for such systems increased in Portugal and throughout Europe with the global credit crunch in 2007-2008. It accelerated as the economic crisis developed from 2010.

Coordinating the collection of food from a wide range of suppliers and distributing it fairly to all ages of needy people all over the country became a complex task for members of the Portuguese Federation of Food Banks.

Unfortunately there will always be spongers keen to take advantage of anything going for free, and scroungers who see benefits or assistance as a way of life. But a great many people genuinely living in poverty through no real fault of their own feel cloaked in shame. 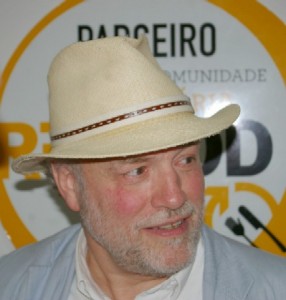 The prevalence of both waste and hunger moved American altruist Hunter Halder to found his so-called Re-food project in 2011 in Lisbon where he has been living for 23 years.

His idea was to complement national food bank services, as well as private charities running soup kitchens within or outside the food bank system.

Re-food’s somewhat different approach was to organize neighborhood teams of unpaid volunteers to collect unused food from a variety of retail and catering outlets, and to repackage and deliver it to the homes of those in need.

In May of this year, when we last reported on this, most of Lisbon’s 24 parishes had Re-Food teams in action or being formed. The system had been introduced to Oporto and plans had been ‘seeded’ in the Algarve.

Halder updated us this week saying that the Re-food project was now growing exponentially and that the 1st Annual Re-food National Encounter meeting will be held on 8th December at the ISCTE-IUL campus in central Lisbon.

Around 500 senior volunteers from all over the country will gather to absorb lessons from the original Re-Food cells established in Lisbon and prepare for setting up more elsewhere.

Thirty-three teams of volunteers have already been formed or are progressing towards full operational status. They include groups in Algoz-Tunes, Albufeira, Almancil, Quarteira and most recently Faro.

Also attending the December 8 meeting will be representatives of more than 40 ‘pioneer’ groups hoping to introduce Re-food in their home areas in 2015.

“Our accelerated growth will bring the benefits of the project to many more people in many more communities,” said Halder.

“At the same time we realize that our growth cannot be only quantitative. We understand that we must also grow qualitatively to insure that we always deliver the best possible service to insure that Re-food is properly replicated in each new community.”

The costs of holding the national meeting are being kept to a minimum with support from ISCTE-IUL, which has drastically reduced their fees for the use of their premises. Several major hotel groups are going to offer rooms to defer the costs of those travelling from afar. Some of the project’s food source partners will deliver lunch at no cost.

Concurrent to the meeting, Re-food is launching a central office dedicated to managing communication and information, assembling and training teams and delivering the tools and know-how necessary to enable others to replicate operations in their own communities.

On whether food wastage in Portugal is being brought under control, Halder was circumspect, but optimistic.

“There is clearly an emerging consciousness that good food is indeed precious and I suspect that all food service enterprises will very quickly re-align their practices to help stop unnecessary food waste – to burnish their public image if for no other reason.

“I would suggest that we are at a tipping point and food waste will be reduced on multiple fronts due to the changing consciousness – and this will bolster efforts to fight hunger.”