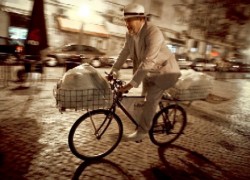 Hunger in Portugal is widespread, mostly far from obvious, sometimes cloaked in shame.

Among those taking concerted action against hunger is an American with a dynamic project he is developing throughout Lisbon and spreading to urban areas in other regions of the country.

Hunter Halder, 62, originally from a village near Richmond, Virginia, is the brains behind the so-called Re-Food program designed to help end both hunger and food waste.

Launched in Lisbon 2011, it so far involves 750 volunteers collecting and repackaging food from more than 300 outlets and distributing it daily to about 850 beneficiaries.

Almost all of Lisbon’s 24 parishes now have a Re-Food team; either already in action or being formed, says Halder. He has introduced the system to Porto and just last weekend he ‘seeded’ the idea at two well-attended meetings in the Algarve. While targeting other cities on the mainland, he also hopes to set up teams in the Azores and Madeira. 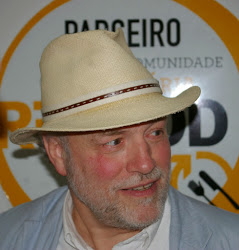 The scheme is intended to complement the work of the Portuguese federation of food banks and private charities running soup kitchens. They have been working together in Lisbon, helping each other where they can, even though Re-Food operates in a somewhat different way.

“What Re-Food brings to the table,” Halder explained, “is an abundance of excellent, ready-to-eat food every day at no, or almost no, cost.

“This is a very big deal because reducing food insufficiency is only possible if massive amounts of food at practically no cost can be obtained daily.

“We target every single scrap of excess prepared food within our neighborhoods by going to every café, restaurant and grocery store every day they are open.

“We raise a team of hundreds of local volunteers – walking, riding bikes and using cars when necessary – to harvest 100% of the previously wasted food, every day, rain or shine.

“We deliver that food to people who are not being served by existing institutions, be they homeless, jobless or in any other condition that leaves them without the means to secure the food they need.

“We go door to door to find and serve those who are ashamed of their need and who, therefore, are practically invisible.”

The project is totally non-profit-making and no one connected with it is paid anything.

“We want everyone who ever serves or donates to this project to know that 100% of their effort, goodwill or resources will be applied exclusively to expand the benefits of our work,” says Halder.

Although he describes the project as being still in the early stages of development, he is optimistic that Lisbon can become the first city in the world with virtually no food waste and no hunger. He foresees no limit to the Re-Food model and believes it can go national, even global.

Using four basic criteria – reducing unnecessary food waste, reducing food insufficiency, strengthening community ties and replication – he is happy to share the Re-Food model with anyone keen to implement it.

The charismatic Hunter Halder has lived in Lisbon for 23 years. His first visit was during a pilgrimage to Fátima in 1988. He married a Portuguese tour guide with whom he had a son. It was his son Christopher, now 24, who came up with the name Re-Food and co-founded the project with his father.

Before that, Hunter’s two young daughters from his second marriage frequently commented about wastage in restaurants and this inspired him to do something about it. His daughters, Mayara, 22, and Raissa, 19, are now both involved in Re-Food.

Halder’s sights are set high, but because of his organizational and operational skills he remains pragmatic.

“It is, of course, impossible to end all food waste,” he conceded, giving as an example the top of the onion you cut off and throw away when making a salad.

“But it is possible to end the trashing of enormous amounts of perfectly good food. The Re-Food model can achieve this because of the power of community mobilization and the fact that we work at the local community level.

“With respect to ending hunger in Lisbon or anywhere else, a dose of humility and reality is in order. We have always had hunger with us and it will not go quietly away. That said, it is also true that the public and private institutions, as well as businesses and citizens, have worked, and are working, to alleviate hunger. All of these efforts are needed.

“Our strategic trajectory has always been to complete our work on the micro local level, replicate throughout the city of Lisbon and then throughout all cities.

“But reality does not follow strategic models. We began replicating throughout Lisbon and beyond long before completing the full implementation in the original parish.

“We have to try to build the capacity to respond to all who want to replicate. The project is universal and we intend to make it universally available,” said Halder.

So far, the project has encountered remarkably few difficulties. The biggest was taking the initial decision in March 2011. Since then it has been easy-going, except for the work involved, of course.

“The food is there for the taking. The volunteers are hungry to help. The community has all of the resources needed. But the true driver is that people want to bring these benefits to their own neighborhoods.”