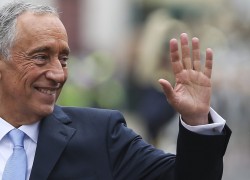 President Rebelo the Sousa, who arrived in New York on Sunday, is accompanied on this visit by former President of Portugal Jorge Sampaio and by Augusto Santos Silva the Portuguese Minister of Foreign Affairs.

The visit closes with a reception at the New York Center for Jewish History co-hosting with the American Sephardi Federation an exhibit dedicated to the life and work of Aristides de Sousa Mendes, the Portuguese Consul-General in Bordeaux, France, who saved thousands of refugees during the second World War II.

President Marcelo Rebelo de Sousa, 68, was inaugurated as the 20th President of the Portuguese on March, 2016. Considered a moderate, he is a former leader of the center-right Social Democratic Party (PSD) in opposition to the ruling Socialist Party (PS). Although the office of President of Portugal is limited mostly to symbolic ceremonial duties, he plays an important role at times of political uncertainty. The Portuguese Constitution allows the president exceptional powers such as meditating conciliation and consensus, dissolving parliament, appointing and dismissing prime ministers and calling for new general elections.