Portugal: Official statistics show 23% are out of work – Lisbon, PT 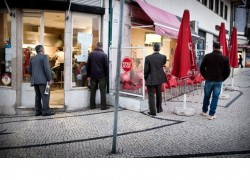 The underemployment rate in Portugal, which includes people excluded from the labor market apart from the unemployed, has hit 23.3% according to figures extrapolated from the National Statistics Institute (INE).

The numbers show that in the three months, up to the end of June, there were 827,000 people out of work, about 15% of the active population, worse than the 14.5% forecast by officials, and a 22.5% increase compared to last year’s figure for the same period.

The INE also issued figures on the number of workers that are underemployed or that are inactive but would like a job.  The total comes to about 1.3 million or some 23.3% of the active population out of work compared to 19.7% in 2011.

The INE reported that Lisbon was the hardest hit area of the country, with unemployment reaching 17.6%.

The number of jobless is expected to continue rising in the second half of 2012 and into 2013.

Portugal’s economy contracted by 3.3 per cent year-on-year in the second quarter, in its steepest fall since 2009, INE said.

Compared to the previous quarter, gross domestic product shrank by 1.2 per cent. The INE attributed the fall mainly to declining domestic consumption.

Portugal is under strict austerity policies after having been granted in May a bailout worth 78 billion euros ($96USD billion dollars) by the European Union and the International Monetary Fund.