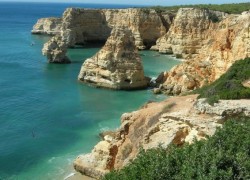 Portugal was named one of the most beautiful countries in the world by online travel advisor UCITYGUIDES.com .

Each country was selected for its natural beauty and man-made wonders, from beautiful cities to ancient villages, parks and scenery.

Portugal, including the Azores and Madeira, is described by UCITYGUIDES.com  as being pristine and rich in natural wonders:

For the pristine natural wonders of the volcanic Azores alone, Portugal would be on this list. Then there’s the “floating garden” that is Madeira, the dramatic coastline and mystical capes of the mainland, the serene plains of the Alentejo with the stunningly-sited white medieval vilages of Marvão and Monsaraz, the Peneda-Gerês National Park, or the perfect collaboration of man and nature in the magic fantasy of Sintra and verdant Douro Valley. And while the old centers of Lisbon and Porto are inexplicably rundown and stubbornly neglected, it’s hard to match their scenic beauty with their grand riverside settings. Everything is in a small scale but when all combined it’s impressive how so much diverse beauty somehow fits in such a tiny country that seems to be a favorite of the sun.

UCITYGUIDES.com  advises urban travelers  to plan their vacations by  presenting them with the best  must-see offers around the world, after their advisors have experienced  the destinations themselves. Read more >>