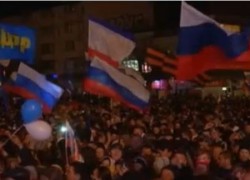 The Ukrainian Ambassador to Lisbon and the non-governmental Association of Ukrainians in Portugal this week added their voices to the near universal condemnation of Russia’s intervention in Ukraine’s sovereign territory that has led to the specter of war.

Prior to the fast-tracked treaty signed by Russia and Crimea on Tuesday, Ambassador Oleksandr Nykonento denounced last Sunday’s referendum and said the vote in favor of Crimea re-joining Russia did not represent “the real will of the people” as it was conducted under “a foreign military presence.”

While acknowledging that Portugal “has already given support to the sovereignty and territorial integrity of Ukraine,” the ambassador said he would like “this voice of support to be more consistent and more practical.”

He also indicated he was not happy with the response of the EU to the growing crisis in his country. He hoped for more solidarity from the international community, particularly the EU.

It is understood that the Ukraine wants strong political support of its territorial integrity; urgent financial support to keep afloat our economy and social support system during a transitional period; long-term economic facilities to support structural reforms and integration into EU markets.

Portugal’s Foreign Minister Rui Machete said after a meeting in Brussels on Monday that the EU was fully behind Ukraine and that there should be no doubt as to its political and economic support.

Meanwhile, the sanctions proposed so far by both the EU and the US against what has been described as Russia’s ‘landgrab,’ have been widely dismissed by international commentators as “feeble” and “toothless.”

By contrast, Russian President Vladimir Putin’s speech in Moscow on Tuesday was unequivocal and defiant. Crimea, he declared, “always has been and always will be an inalienable part of Russia.”

During a debate in parliament in Lisbon two weeks ago Prime Minister Pedro Passos Coelho called for “for mediation and for moderation” in the way people express opinions on the crisis in Ukraine. “It’s an appeal we make to all our European partners, but also to all international institutions,” he said.

The Association of Ukrainians in Portugal, the biggest body representing the second largest immigrant community in Portugal, says it intends to continue holding what it calls ‘awareness-raising’ protest rallies outside the Russian Embassy in Lisbon until Russia withdraws its troops from Ukraine.

The association’s president, Pavlo Sadokha, has described Russia’s intervention in the Ukraine autonomous region of Crimea as “illegal and in breach of international law,” and likened it to Hitler’s annexation of Austria in 1938.

“Ukraine is a multicultural state respectful of its minorities, and it should continue like that. In Crimea, unfortunately, the Ukrainian and Crimean Tatar minorities are subject to discrimination, especially in these days of occupation.”

Mr Sadokha added that Russia’s intervention was “a challenge for the stability in Europe and the world. It is a matter for all of us.”

The prospect of armed conflict arising from the present tense situation has prompted more than 50 Ukrainian men taking part in the Lisbon rallies to submit their names for enrollment in the newly formed National Guard of Ukraine.

If Russia goes ahead and formally absorbs Crimea into the Federation – as now seems certain – or broadens its intervention in the Ukraine, it could lead to a humanitarian crisis with large numbers of refugees seeking sanctuary elsewhere in Ukraine or abroad.