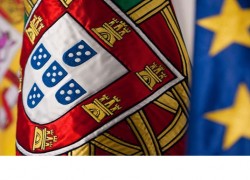 The European Commission has confirmed that the international  financial assistance to Portugal comes to a close on May 17th, ending the 3-year bailout program, it was reported on Monday.

In a prepared statement, the European Commission has said that, “There is no political consideration behind any technical extension to the Portuguese program that ends effectively on May 17,” adding that the final payment would be made in late June.

Emerging from a harsh recession – unemployment rate at 15.5% (over 35% among the youth) and workers standing amongst the lowest in the Eurozone – Portugal’s economic growth was up 1.1% in the second quarter of last year, the strongest quarterly growth in the European Union.

On April 11, Fitch Ratings had upgraded its outlook for Portugal to positive, but maintained the country’s rating at BB+.

Fitch also raised its economic growth forecast for Portugal, now forecasting GDP growth at 1.3% in this year and 1.5% in 2015.

In May 2011, Portugal had received a 78 billion euro financial rescue package from the European Union and the International Monetary Fund.

Portugal is likely to return to the international bond markets after exiting its bailout in June, it was reported.