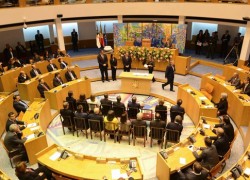 The President of the Government of the Azores, Vasco Cordeiro, has said it was a “great victory” for the Region the ruling, by Portugal’s Constitutional Court, that the regional budget for 2014 will be implemented, as approved by the Azorean Parliament, despite being questioned by central government authorities.

“The decision that has been made public is a great victory for the Azorean people and for our Autonomy,” Vasco Cordeiro told journalists in Ponta Delgada, the seat of the Regional government.

On Monday, Portugal’s Constitutional Court had ruled that the Regional budget would stand, after the representative of the central government in the Azores had sent the document to Lisbon for review, over disputed state budget measures regarding cuts in public employees pay.

Cordeiro described the court decision as “a clear defeat of an archaic and dusty vision of Autonomy that is firmly rejected by Azoreans and which is now also rejected by the Constitutional Court,” he said.

He also said that the decision confirmed the legitimacy of the Region’s option on following its own course, away from what he called the “frenzy of sacrifices and cuts” imposed by the Lisbon government.