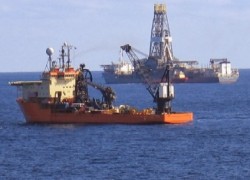 The multinational Repsol-Partex oil and gas consortium says it will commence “clean and safe” exploratory drilling off the south coast of Portugal late this year or early next, but it may be another four or five years before it can accurately gauge if hydrocarbon deposits are sufficient to make it worthwhile to proceed to commercial extraction.

The consortium has already carried out seismic surveys and other preparatory studies since acquiring the offshore concession for blocks 13 and 14 in Algarve waters in October 2011. As the exploration is still in the preliminary stages, no firm date can yet be set for the start of drilling.

Repsol, with its headquarters in Madrid and 90% of the shares in the partnership with Lisbon-based Partex, is the main operator in the Algarve project.

In September 2012, Repsol in partnership with Petrobras, Galp and Partex acquired the rights to prospect in Peniche Bay north of Lisbon. The Brazilian corporation Petrobras withdrew from the consortium last May leaving Repsol as the project operator with 65% of the shares. Galp has 30% participation and Partex the remaining 5%. Drilling off Peniche is not expected to start until at least 2016.

While much more sophisticated exploratory techniques exist these days, onshore and offshore searches have been carried out in Portuguese waters for many decades. Several major companies, including Shell, Chevron and Esso, have drilled scores of wells in various demarcated blocks, especially since the 1970s. No commercial production has ever been achieved.

The Poseidon gas fields in the Cadiz basin suggest that deposits in the neighboring Algarve basin are more likely to contain commercial quantities of natural gas rather than oil.

A Repsol spokesman told Portugal Newswatch this week that environmental and safety studies are being carried out before any drilling takes place. This comes amid public concerns about the possible impact of drilling on regional tourism and the economy, as well as the fishing industry, marine ecosystems and coastal landscapes.

“Environmental and safety studies are being conducted to guarantee a clean and safe drilling operation,” the spokesman said. “Repsol does environmental and safety studies prior to any operation, taking into account the social, economic and environmental issues and following legislation and the highest international standards in the industry. The company takes into consideration such studies in the planning of the operations and works closely with national and local authorities.”

On the subject of pollution, the spokesman added: “One basic difference between gas and oil is that gas evaporates and oil needs containment on water surfaces. In the event of a well failure, gas spills are easier to control than oil spills, as the gas is not retained in the seawater. No water pollution is generated and the hydrocarbon bubbles into the atmosphere until well control is achieved. In the Algarve, as no hazardous gas is expected, a gas pollution case is an extremely improbable situation.”

It is still too early in the exploration process to know exactly where the Algarve or Peniche drilling rigs will be located, “but they will always be some tens of kilometers off the coast and will not be visible from the shore,” said the spokesman.