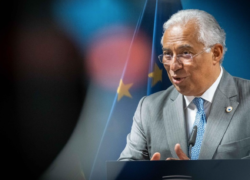 On assuming the rotating presidency of the Council of the European Union on New Year’s Day, Portugal’s top political leaders sounded remarkably enthusiastic and positive about tackling the huge challenges facing the 27 member states over the next six months.

Prime Minister António Costa and Foreign Minister Augusto Santos Silva say their prime objectives will be to activate the Europe-wide mass Covid vaccination programme, as well as the €750 billion national recovery plan to alleviate the financial impacts of the pandemic.

The EU has been criticised for being rather slow to start the vaccination procedures while a new and more infectious strain of the coronavirus is spreading across the continent.

Portugal will be acting on this and other key matters in conjunction with the European Commission, presided over by Ursula von der Leyen.

This will be the fourth time Portugal has held the Council presidency, the first being in 1992, then again in 2000. The 2007 presidency was marked by the Lisbon Treaty that aimed to reform the Union.

From now until June, free universal vaccination for citizens in the 27 member states will be a priority. However, social restrictions, including the wearing of masks, are expected to continue for many months.

Portugal intends to focus very much on increasing solidarity between the member states. That will include activating social justice issues that have so far been divisive. Negotiations will look for common ground on the EU asylum and migration system. Some member states want to ban migrants of certain nationalities or cultures, if not close the EU to migrants altogether. Portugal is among those opposed to such limitations.This controversy will be high on the agenda during an EU summit meeting in northern Portuguese city of Porto in May.

While maintaining as useful an agreement as possible with the UK following the post-Brexit trade deal signed on Christmas Eve, Portugal will seek to further balanced trade deals with other countries, especially India and China. Efforts will be made too to improve relations with the US that were negatively disrupted by President Trump.

Strengthening small and medium-sized businesses, which are fundamental to the EU economy, will be another primary focus under the Portuguese presidency.

EU budget arrangements were vetoed by Poland and Hungary during the last EU summit, but the €750 billion Covid recovery plan will be crucial for Portugal itself as well as for all the other member states.

The social and economic devastation caused by the pandemic has come hard on the heels of Portugal edging back to normality after the debt and bailout crisis.

The tourism sector, which is critical to the country’s income, has been brought to a virtual halt by the pandemic. Unemployment has increased to about 9%. Public debt has soared to a record 131% of GDP.

26shares
Share this ArticleLike this article? Email it to a friend!
Email sent!