Nassau County, one of the largest counties in the United States, has officially announced their honorees and program for its 2013 Portugal Day Celebration on Long Island, NY.

Before the official ceremony commences at 6:30pm, the event will offer a presentation of traditional Portuguese food, drinks and deserts donated from local businesses. The legislative chambers and a foyer with a video feed of the event are expected to be filled to capacity by the time opening ceremonies start. This event will include Yonkers-based Associação de Marinheiros da Armada Portuguesa as color guard, students of the Julio Dinis Portuguese school, signing the national anthem, and the Long Island Portuguese Lions Club’s presentation of the Pledge of Allegiance.

Honorary Chairman and 2012 Man of the Year, Senator Jack Martins, will then lead speeches from an array of public officials from all levels of government such as County Clerk Maureen O’Connell, Legislator Richard Nicolello, Assemblyman Ed Ra and Mayor Scott Strauss.

Ambassador of Portugal to the United States, Nuno Brito, on his first visit to Nassau since being appointed in 2011, will deliver the celebration’s keynote address.

After the speeches, there will be an intermission that will once again feature a cultural presentation by the two folkdance groups, Rancho Folclorico Juventude and Rancho Folclorico Sonhos de Portugal from the Mineola Portuguese Center.

The second-half of the event will feature the honoring of almost 20 of Nassau’s most accomplished Portuguese-American’s for their contributions to the community with the “Investors Bank Persons of the Year Awards.”

These recipients, chosen by a committee of Presidents, from almost a dozen Portuguese-American organizations, will be headlined by Mineola Deputy Mayor Paul Pereira, as Man of the Year, and philanthropist Rosa Leal, as Woman of the Year.

The Young Persons of the Year will be awarded to this event’s founder, Gabriel Marques, and Long Island Portuguese Lions Club members Jaimie Silva and Stefanie Ribeiro.

The evening will end with what County Officials are calling a “special” gift honoring the commitment and contributions of the Portuguese community in the County, which will be announced the week of May 27th. 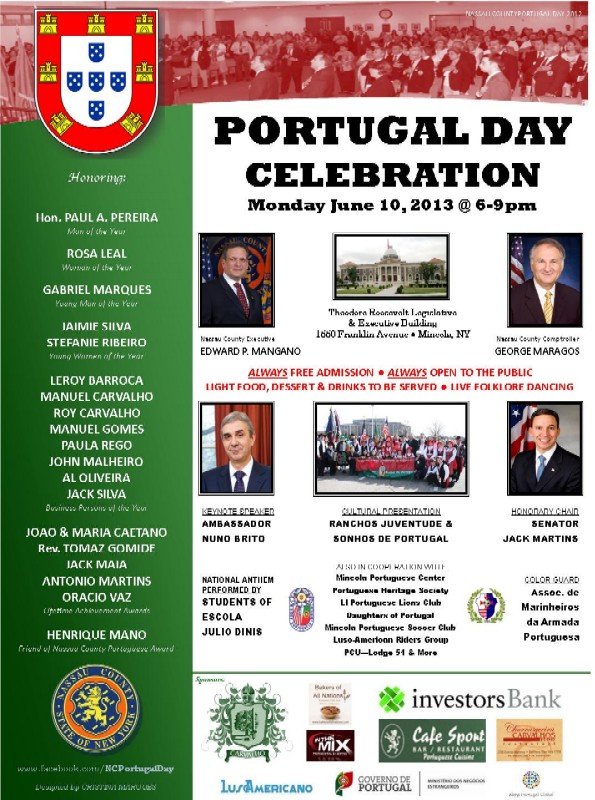