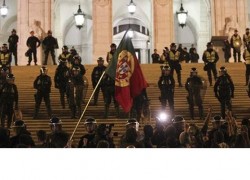 After addressing the nation on Wednesday, President Aníbal Cavaco Silva held separate meetings with Prime Minister Passos  Coelho and  the leaders of  the three main parties – the Social Democratic Party (PSD)  opposition Socialist Party (PS) and of the Christian Democrats (CDS-PP) – to seek an accord of “national salvation.”

In his address, Portugal’s President had asked the three parties to form a national salvation alliance and to agree on early elections in July 2014.  In his speech, the President had said that elections before July 2014, would be “extremely negative for the national interest” given the country’s need to maintain its credibility with its lenders and international investors.

He also said that if an agreement between the main parties was not reached, he would take steps to find alternative solutions. “I will give my firm support to such a deal, which, in the present emergency truly represents a national salvation commitment,” he said later in the week.

Observers have advanced that if an agreement between the three parties is not reached, the President could reach for a “government of presidential initiative,” perhaps led by a non-politician.

Following meetings with the President, the leaders of each one of the three main parties held consultation meetings to address the President’s proposal.

The Socialist Party (PS) said that it would not take part in government without new general elections and that it would not participated in a “national salvation” alliance with the governing coalition, but that it was open to dialogue to find a solution for the political crisis.

The Socialists also said that the dialogue should include “all political parties with seats in parliament” and not just the big three and that it should emphasize “policies that promote economic growth, employment and bolster Portugal’s position in the European Union (EU)”.

The governing PSD/CDS-PP coalition said they had accepted the dialogue, but that they would not compromise with having early elections before July 2014. They also said that, given the current political situation, a request was made to Portugal’s lenders to postpone their assessment rounds for late August/early September.

The European Union (EU) economic affairs spokesman, Simon O’Connor, had said on Thursday there were negotiations going on between the troika (International Monetary Fund, European Central Bank and European Commission) and the Portuguese government.

On Friday, Portuguese Prime Minister Pedro Passos Coelho said in parliament that on the 2nd quarter of this year Portugal had registered some economic growth “even though timid” and argued that “Portugal cannot stop now.”  He also said that the PSD/CDS-PP/PS alliance proposed by President Cavaco Silva was more urgent than ever.