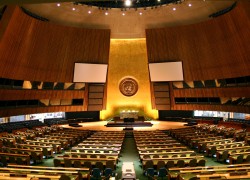 Portugal assumed Tuesday the rotating monthly presidency of the Security Council of the United Nations for November, replacing Jog Ogwu, the Nigerian UN ambassador, who presided to the Council for the month of October.

Portugal is presiding at 15-nation body at a time when it is reviewing the Palestinian bid for full UN membership.

Ambassador José Filipe Mendes Moraes Cabral, the permanent Portuguese representative to the United Nations, is expected to brief the press later this week on the work of the Security Council.

The month’s agenda, approved Wednesday, also includes discussions of Libya, Guinea-Bissau, DR Congo, Sudan, East Timor, the Middle East and Yemen, but the crisis in Syria and the process of Palestine’s admission to the UN were expected to continue to dominate the council’s attention.

Moraes Cabral said he would exercise the body’s presidency as “a European country”, but always with a “view to building bridges”, as is characteristic of Portuguese history.

The Security Council presidency rotates among Council members in the English alphabetical order of their names. Each president holds office for one calendar month.

Both Nigeria and Portugal are among the 10 non-permanent members which work with the Council’s five permanent members — China, France, the Russian Federation, the United Kingdom and the United States — to maintain peace and security in the world at large.

The conflict between Israel and Palestine has become a salient issue at the general debate of the 66th session of the UN General Assembly in September, due in large part to Palestine’s statehood bid.