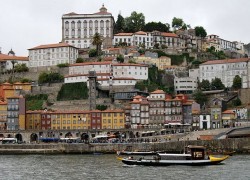 The northern city of Porto, Portugal’s biggest surf center, is hosting the first edition of the International Porto Surf Film Festival, to be held March 29-31.

The festival will screen a selection of the best surf movies ever made. According to Carlos Rui Ribeiro, co-founder of the Porto Surf Film Festival, the event is open to a wide range of movies, including new ideas, cultures and explorations. The aim is to attract surfers and cinema fans.

“The Porto Surf Film Festival is designed for the surfers and for those who never rode a wave. That is our challenge. It’s important to prove that surf movies are more than a collection of waves, stars and surfboards,” Ribeiro said in a recent interview.

Porto Surf Film Festival will showcase international feature films and documentaries about surfing and the ocean, from the 60’s to the present .

The official program includes “One Winter Story”, “The Endless Summer II”, “Singlefin: Yellow”, “Thicker Than Water”, “Finnsurf”, “Sea Fever”, “The Lost Wave”, “Castles In The Sky”, “A Brokedown Melody” and “Surfing With the Enemy”.

Porto is the second largest Portuguese city and one of the most important urban cultural centers  in the North of Portugal. Home to Porto wine, the city has great surf spots, history, cultural venues, night life and outdoor activities.  An upscale tourism destination, Porto was recognized as a World Heritage Site by UNESCO.

All movies will be screened at the Auditório Almeida Garrett, in Palácio de Cristal, in the center of Porto. All tickets are purchased electronically via the festival official website.