Pordata: One fifth of the Portuguese population lives in poverty – Portugal 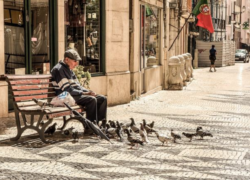 In Portugal, the most recent data from 2020, revealed that about two million people are at risk of poverty and social exclusion.

The data was provided this Sunday by Pordata, a database developed by the Francisco Manuel dos Santos Foundation, to mark the international day for the eradication of poverty.

According to the data, currently more than 1.6 million of the Portuguese population (16%) lives on incomes below the poverty level, the lowest since 2000.

The Pordata data also revealed that the highest rates of poverty were registered in 2003, 2013 and 2014, when poverty reached about one in five individuals.

It was also revealed that in 2020, 9.5% of the employed population lived on incomes below the poverty level, the 8th place when compared to 21 countries of the European Union, placing Portugal among the countries with the highest risk of poverty among workers.

Of these, 52% are women and 41% are under 25 years old. In most countries the risk of poverty does not reach 5% of the employed population.

The number of students on public assistance has also progressively increased from 328 thousand in 2010 to 380 thousand in 2019. Because the risk of poverty increases with lower levels of education, in Portugal one in four people, with only the 9th grade, is at risk of becoming poor.

Pordata was established in 2009 by the Francisco Manuel dos Santos Foundation with the goal to support data researching and the dissemination of information for public debate.

Based on Worldometer, the latest data provided by the United Nations, the current Population of Portugal is estimated at 10,158.411 (2021).