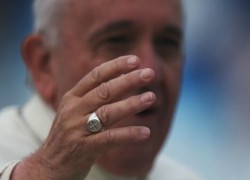 Earlier this week Pope Francis spoke to a Portuguese audience in an exclusive interview with Lisbon based Catholic Rádio Renascença.

In the interview Pope Francis confirmed his intention to visit Portugal in 2017, on the 100th anniversary of the Marian Apparitions in Fátima.

“I was only once in Portugal many years ago, on the way to Rome, in a plane that stopped off in Lisbon,” he said in the interview.

When asked how the faithful in Portugal can prepare for his visit, Pope Francis replied: “By praying.”

“I said I want to go, I’d like to go. It is easier to get to Portugal; we can go and return on the same day or, at the most, go for a day and half or two days. To go and see the Blessed Virgin,” he remarked.

Pope Francis did not confirm if he will be visiting the Azores as part of the announced papal visit to mainland Portugal, at the invitation of the Rev. António Sousa Braga, Bishop of Angra do Heroísmo, Terceira.

In the interview, Pope Francis addressed various themes including the migrant situation in different continents and how political corruption continues to disappoint people. He also spoke of Extraordinary Jubilee Year of Mercy (Dec. 8 – Nov. 20, 2016); the many challenges facing today’s the families, his recent move to reform the marriage annulment process, and the upcoming Synod of Bishops on the Family in Rome this October.

On Jubilee Year of Mercy, which the Pope announced on March 13th, he noted his hope that “everyone will come. May they come and experience God’s love and forgiveness.”The Holy Father also revealed some details about his personal life, speaking about his vocation and what he misses now that he is Pontiff.

Pope Francis will visit the United States September 22-27, 2015. The complete program for the Apostolic Journey was released by the Vatican on June 30, 2015.  All times listed here are Eastern Daylight Time.

The following is a selection of some of the most relevant talking points by Pope Francis, in English translation, provided Rádio Renascença.

On taking risks: “Life without problems is dull. It’s boring. Man has, within him, the need to face and solve conflicts and problems. Obviously, an education to not have problems is an aseptic education. Try it: Take a glass of mineral water, common tap water, then take a glass of distilled water. It’s disgusting, but the distilled water doesn’t have problems. … (laughs) . It’s like raising children in a lab, isn’t it? Please! . Run risks and always set goals!”

On today’s entitlement culture: “We demand our rights, but not our obligations towards society. I believe that rights and obligations should go hand in hand. Otherwise we are creating a mirror education; because education in front of a mirror is narcissism and today we are living in a narcissistic civilization.”

On the refugee crisis: “These poor people are fleeing war, hunger, but that is the tip of the iceberg. Because underneath that is the cause, and the cause is a bad and unjust socio-economic system, in everything, in the world. Speaking of the ecological issue, within our socio-economic structure, within politics, at the center there must always be the person. And today’s dominant economic system has replaced the person at the center with the god of money, the idol.”

On immigration: “When there is an empty space, people try to fill it. If a country has no children, immigrants come in and take their place. I think of the birth rate in Italy, Portugal and Spain. I believe it is close to zero percent. So, if there are no children, there are empty spaces. And this not wanting to have children is, partly — and this is my interpretation, which may not be correct — due to a culture of comfort, isn’t it? In my own family I heard, a few years ago, my Italian cousins saying: ‘Children? No. We prefer to travel on our vacations, or buy a villa, or this and that.’… And the elderly are more and more alone.”

On his own immigrant experience: “I am the son of emigrants and I belong to the emigration of 1929 (from Italy to Argentina). . It is true that, in those days there was work, but the ones from my family — who had jobs when they arrived in 1929 — by 1932, with the economic crisis of the ‘30s, were out on the street, with nothing. My grandfather bought a warehouse with 2,000 pesos which he borrowed, and my father, who was an accountant, was selling goods out of a basket. So they had the will to fight, to succeed. … I know about migration!”On the need for the Catholic Church to reform: “If somebody has a room in his house which is closed for long periods, it develops humidity, and a bad smell. If a church, a parish, a diocese or an institute lives closed in on itself, it grows ill and we are left with a scrawny church, with strict rules, no creativity. Safe, more than safe, insured by an insurance agency, but not safe! On the contrary — if it goes forth — if a church and a parish go out into the world, then once outside they might suffer the same fate as anybody else who goes out: have an accident. Well, in that case, between a sick and a bruised church, I prefer the bruised, because at least it went into the street.”

On Jesus teachings and the Church:  “In the Bible, in the book of the Apocalypse, there is something extremely beautiful about Jesus in which he is speaking to a church and says: ‘I am at the door and I knock. . If you open the door I will come in and share a meal with you.’ But, I ask, how often, in church, has Jesus knocked on the door, but on the inside, so as to be let out to proclaim the kingdom. Sometimes we appropriate Jesus just for us and we forget that a church which is not going out into the world, a church which does not go out, keeps Jesus imprisoned.”

On Europe’s future: “I believe Europe’s greatest challenge is to go back to being a mother Europe (as opposed to) grandmother Europe.”

On religious orders and the refugee crisis: Take in refugees, or start paying taxes.  “Some religious orders say ‘No, now that the convent is empty we are going to make a hotel and we can have guests, and support ourselves that way, or make money.” He continued, “Well, if that is what you want to do, then pay taxes! A religious school is tax-exempt because it is religious, but if it is functioning as a hotel, then it should pay taxes just like its neighbor. Otherwise it is not fair business.” He added that Bishops should “express the Gospel in concrete terms,” by taking in refugees.

On welcoming divorced couples: “At the synod (next month’s Vatican summit of bishops from around the world) we will be speaking about all the possible ways to help these families. But one thing should be very clear — something Pope (Emeritus) Benedict XVI left quite clear: People who are in a second union are not excommunicated and should be integrated into church life. This was made crystal clear. I also said this quite clearly: drawing closer to the Mass, to catechesis, their children’s education, charity. … There are so many different options.”

On his own popularity: “I often ask myself what my cross will be like, what my cross is like. … Crosses exist. You can’t see them, but they are there. Jesus also, for a certain time, was very popular, and look at how that turned out. So nobody has their happiness guaranteed in this world.”

On trying to reach out:  “Yes, I need to get out, but it’s still not quite time. … But little by little I have some contact with people on Wednesdays (at the public general audience in St. Peter’s Square) and that helps me a lot. What I miss most about Buenos Aires is going out and walking in the street.”

On being pope: “You have to ask the Holy Spirit!” On what keeps him awake at night: “The truth? I sleep like a rock!” On what motivates him: “Having lots of work to do.” On how often he goes to confession: “Every 15 or 20 days. I confess to a Franciscan priest, Father Blanco, who is kind enough to come here and confess me. And I never had to call an ambulance to take him back in shock over my sins!” On how and where he would like to die: “Wherever God wants. Seriously … Wherever God wants.”

On how eternity is like: “When I was younger I imagined it would be very dull (laughs). Now, I think it is a mystery of encounter. It is almost unimaginable, but it must be very beautiful and wonderful to meet with God.”

The full interview with Pope Francis with Rádio Renascença.