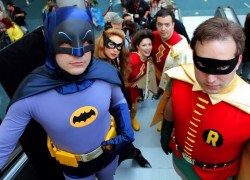 Portugal will host its first Comic-Con Portugal convention to be held in Porto city, in December 5-7, 2014. Taking place at EXPONOR – Porto International Fair – the event is expected to attract over 20,000 participants.

Organized by Conventions in the Yard (CITY), the Porto Comic Con Portugal Convention will host celebrity guests and guest artists, including comics creators, science fiction and fantasy authors, film and television directors, producers, and writers, and creators from all forms of the popular arts together with their fans.

The convention will be dedicated to creating awareness of, and appreciation for, comics and related popular art forms, primarily through the presentation of conventions and events that celebrate the historic and ongoing contribution of comics to art and culture.

Comic Con conventions take place year round in hundreds of cities in the United States and around the world.

Disclaimer: Comic-Con International, based in San Diego, USA, has stated to the Portuguese American Journal” it has no affiliation with any conventions  in Portugal.”