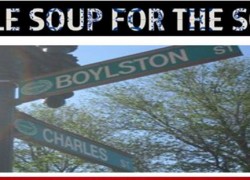 The “Kale Soup for the Soul” initiative is launching its 2013 literary series with two East Coast poetry readings.  The series will open with a reading in Boston, March 7th, starting at 6:30, at the Portuguese Consulate, (699 Boylston Street, 7th Floor), co-sponsored by the Consulate General of Portugal, the Boston Portuguese Festival (BPF), and the Camoes Institute. The event, food and refreshments, is free and open to the public.

Plans for additional “Kale Soup for the Soul” events are being organized for cities in the United States where the Portuguese presence is significant. For suggestions for future readings,  “Like” the Kale Soup for the Soul Facebook group or send an email to organizer Millicent Accardi at MillB@aol.com.

Millicent Borges Accardi is the author of three poetry books: Injuring Eternity, Woman on a Shaky Bridge and Only More So (forthcoming Salmon Press). She has received fellowships from the NEA, California Arts Council, Barbara Demming Foundation and CantoMundo.

PaulA Neves was born and raised in and around the Ironbound section of Newark, NJ. Her writing has appeared most recently in The Waiting Room Reader, Vol II: Words to Keep You Company; The New Laurel Review, and The Newark Metro. She holds an MFA in Creative Writing from Rutgers-Newark, where she is an adjunct professor of English composition.

Carlo Matos is the author of three books of poetry (A School for Fishermen, Counting Sheep Till Doomsday and Big Bad Asterisk) along with a scholarly book (Ibsen’s Foreign Contagion). He teaches writing at the City Colleges of Chicago.

Amy Sayre Baptista lives and writes between two places that shaped her family: the Madeira Islands and Eastern Tennessee. She teaches at Benedictine University, and is an associate poetry editor at Quiddity Literary Journal. Her latest publication is Ninth Letter.

Brian Sousa (lives in Boston), and is the author of a short story collection Almost Gone, (Dartmouth, MA, Tagus Press, 2013), and has had poetry in Redivider, Gavea-Brown, and The Writer journals. He was awarded a Rhode Island Arts Council fellowship and teaches at Boston College.

Nancy Vieira Couto is the author of a poetry collection, The Face in the Wate, and a chapbook, Carlisle & the Common Accident.  Her awards include two NEA fellowships and an Agnes Lynch Starrett Prize.  She was born in New Bedford, Massachusetts, received a B.S. in Ed. from Bridgewater State College, and an M.F.A. from Cornell University.  She now lives in Ithaca, New York, where she is poetry editor of Epoch.

Luis Gonçalves is a professor at Princeton University. He holds a Ph.D. in Romance Languages from the University of North Carolina at Chapel Hill. He specializes in Lusophone Cultures and their Diasporas, frequently organizing conferences, panels and presenting papers in Portugal, Brazil, and the US. Professor Gonçalves is the current Gavea-Brown – A Bilingual Journal of Portuguese-American Letters and Studies – Book Review Editor. In addition, he has published book reviews and articles in many academic journals.