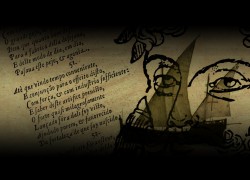 The Portugal Day is a national holiday celebrating the life of Luiz Vaz de Camões, Portugal’s national poet who died on the 10th of June 1580 and wrote Os Lusíadas, Portugal’s national epic poem exulting the 16th century Portuguese historic achievements. Camões was an adventurer who survived a shipwreck in present-day Vietnam. Part of the legendry that has come down to us is the image of the shipwrecked Camões holding aloft in his right hand above the waves his “first” manuscript of Os Lusiadas as he swims boldly towards the shore and his survival.  This poem by George Monteiro entertains the notion that he abandons the manuscript as he swims realizing that he has already a better poem in his head. 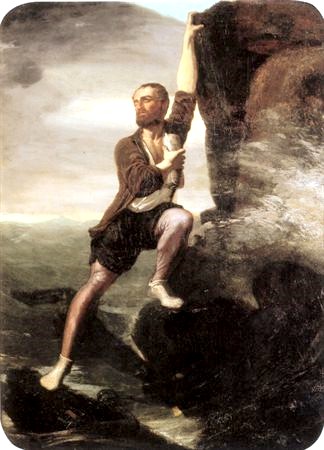 Hefting his manuscript above
the waves as he swims away
from the ship sinking into
the sea, the poet thinks of a
rhyme not hitherto employed
(as far as he can tell) in all
the Christian languages he
knows.  But he has already
completed his poem, having
put on the finishing touches,
having inserted the last of his
revisions just the day before
when all looked rosy for the
mariner-poet homeward bound.
Still, he can’t keep himself from
working backwards from the
rhyme, filling out lines, two of them,
then a third, a fourth, and so on—
until flush with new creation, he
lets his manuscript go, freeing up
his second arm for the long swim
needful to save the poem that’s
percolating in his brain. Later, he
will tell his true story, but, oddly,
it will not stick, the illustrators
leading the historians, who freeze-
frame the poet (as they see him),
arm flexed defiantly to the wind,
holding his manuscript above the
wily waves, the destructive water.