Poem: A Letter to My Children on Goya’s Paintings of the Executions – By Jorge de Sena

Collected in 1963 in Metamorfoses, Jorge de Sena’s sixth volume of poetry, “Carta a meus filhos sobre os fuzilamentos de Goya” first appeared in the literary pages of the Brazilian newspaper O Estado de São Paulo on December 10, 1960. All the poems in Metamorfoses, as Sena indicates, were inspired by works of art, supplemented by works of the human imagination not commonly categorized as art, such as John Keats’s death mask or Vostok, the Russian space mission that circled the Earth for one day in 1961. The following is a translation of “Carta a meus filhos sobre os fuzilamentos de Goya” by Portuguese American poet George Monteiro. 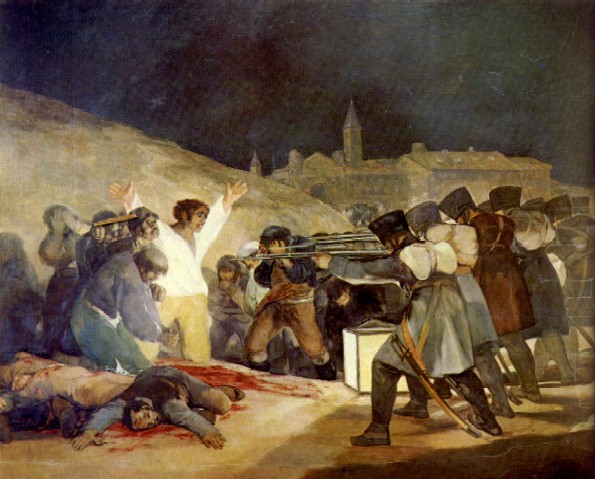 What your world will be like, my children, I do not know.
It is possible (anything is possible) that it will be
the very one I desire for you: a simple world
in which all difficulties arise merely
from the fact that nothing in existence
fails to be simple and natural,
a world which permits you everything,
to taste, desire, pleasure, allows you to respect others,
and allows them to respect you.
But possibly even that life will not interest you.
Everything is possible,
even when we fight for all we are worth
(as we should) for freedom and justice,
or beyond either of those, in fealty
to the honor of being alive.
Some day you will know
that we cannot count those who have thought this way,
who have loved their fellow-creatures for what makes them
unique, uncommon, free, and different,
and who have been sacrificed, tortured, beaten,
and delivered over with hypocrisy to the secular justice,
so that they could be liquidated “with great pity
and no bloodshed.”
For having been faithful to a god, a thought,
a country, a hope, or to nothing more than the unanswerable
hunger that gnawed at their bellies,
they were eviscerated, flayed, torched, gassed,
and their bodies stacked up anonymously, even as they had
lived, and their ashes scattered so that no memory
of them would survive.
Sometimes for belonging to a race, at other times to a
class, they paid for errors
they had not committed and had no awareness
of having committed. But it has also happened
and still happens that some were not killed.
There has always been an endless number of ways to prevail,
to annul calmly, delicately,
through trackless paths of which it is said they are
trackless as are those of god.
These executions–this heroism, this horror—
one thing among a thousand things, happened in Spain
over a century ago and, violent and unjust,
brought sickness to the heart of a painter called Goya
merely a brief episode,
in a chain of which you are (or are not)
one link of iron and sweat and blood and a bit of semen
on the road of the world that I dream for you.
Believe me, no world, nothing and no one
is worth more than any single life and the joy one has
in living that life.
What most matters is the joy.
Believe it, the dignity they will tell you so much about
is but the joy that comes
from being alive and knowing that no one is ever less alive
or suffers or dies so that one of you can put off a bit
longer that death which belongs to you and comes to
everyone.
That you will accept this knowledge serenely,
blaming no one, without terror or ambition,
and above all without detachment and indifference,
I ardently expect. One day such blood,
such pain, such anguish–
even if the tedium of a happy world persecutes you–
will not be in vain. I confess that often,
thinking on the horrors of so many centuries
of oppression and cruelty, I hesitate for a moment
and an inconsolable bitterness floods through me.
Are they or are they not in vain? Yet even if they are not
in vain, who can revive those millions, who will restore to
them their lives and all that was taken from them?
No final judgment, my children, can give back to them
that instant of life they were not permitted to live, that
goal they did not realize, the love they would have lived
“tomorrow.”
The very world that we create, thus,
compels us to handle it carefully, like a thing
that is not ours along, a world ceded to us
to guard respectfully
in the memory of the blood in our veins,
the flesh of a different flesh, the love
that others could not give because it was stolen from them.